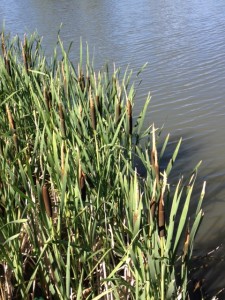 Here’s a picture from a bird walk I did with a group at Hudson Gardens last weekend.  No there aren’t any birds in this one, so don’t look for the red-winged blackbird that was nearby.  On that beautiful summer morning I saw a number of birds: a blue heron taking flight from the bank of the South Platte; a cowbird perched at the top of a large cottonwood; a mud swallow in her nest: a brilliantly plumed yellow warbler (yes, warbling while perched in a tree); a cute little chickadee-dee-dee; and a couple hawks flying above us – a red-tailed and a Swainson’s hawk.  Now, down to business. . .

Sometime back I featured a blog post which was written by my friend and colleague Ayo Labode about filial responsibility law (the duty of a child to care for the parent) and that has been a popular post.  Colorado doesn’t have those archaic laws and I don’t think there’s much concern that our legislature is likely to adopt such legislation.  A more common question that is likely to elicit concern and fear, along with a variety of information and misinformation – concerns whether a parent’s debt can be inherited.

This was a much bigger concern a few years back when we were in the midst of economic downturn and grim employment prospects, and many Americans found themselves underwater in their mortgages and out of jobs.  During that time, many of us had to consider very carefully whether it was a good idea to open an estate to collect the assets (even if there were few of them).

A much broader concern however, concerns debts in a decedent’s estate.  Sometimes a parent or other loved one dies with large debts.  This can present many problems for surviving family members about what to do and how to proceed.  Here is an interesting article about this.  An interesting topic – alas, for another post – concerns what is considered or becomes probate property administered by an estate administration proceeding (whether there is a will or no will) and what is nonprobate property that will not typically be subject to probate estate administration.  But remember that it is a good idea to remember to make beneficiary designations for nonprobate assets, these can generally help maintain flexibility as I noted in my Inherited IRAs post a couple weeks ago, reprinted here in this CBA/CLE Legal Connection blog post.

Probably one of the most feared issues under this heading is “Medicaid estate recovery.”  This fearsome prospect does not appear to be widely used in Colorado at this time (based on anecdotal evidence I have collected).  In this context, a house (a typical “probate” asset) is the only substantial asset a person may keep and still qualify for Medicaid. So the state may place an estate recovery lien on a parent’s home to recover those Medicaid payments.  As Ayo explained in the post referred to above, Medicaid will not come after the children of a Medicaid institutionalized parent.

Once an estate is opened, it is open for all comers, so to speak.  This means the bill collectors of course.  Under our probate code, a creditor is entitled to open an estate of a deceased person if no other person has opened one after forty-five days following the debtor’s death.  Our probate code provides a list of claim and creditor priorities, so there is an order to who goes to the front of the line (like medical expenses of a last illness) and who gets relegated to the back (usually unsecured creditors like credit card companies).  Claims must generally be filed within one year of the death, but when an estate is opened for a decedent, it is typical to publish a “notce to creditors” which provides notice to the world and shortens the time period for claims to be filed.

This is why it is a good idea to consider carefully whether to open an estate – to avoid administering an estate that has no real assets or will benefit only creditors. Debts generally come off the top of the estate, so to speak – the beneficiaries (under a will) or distributees (where there is no will) get their share after creditors’ claims have been paid.

“Secured” means the debt has physical collateral that guarantees the balance. These are debts like mortgages (secured by the home itself) and car loans (typically secured by the car).

This is debt that is not secured by any collateral but simply is a promise to pay under an agreement.

This is already getting to be a rather long and complicated post, so let me conclude with WHAT TO AVOID.

The easiest way to inherit your parent’s debt:

To reiterate, sometimes the decision of whether to open estate must be made very carefully, in consideration of what is the asset/debt ratio of all property and whether an opening of probate is for some other reasons a good idea or required.   For example, under Colorado law (for the year 2014) a collection by affidavit can be used by a successor to collect assets not exceeding $64,000.00.  The use of such an affidavit is only appropriate where there is no estate opened on behalf of the decedent.  I will write more on this topic in the future, so stay tuned!