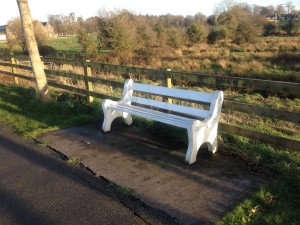 Bench along the Maigue

In a recent issue of the ABA Journal, under “Trusts & Estates,” Debra Cassens Weiss penned [wait – can I use that verb for an e-zine article?] “Estate Dispute Caused by ‘E-Z Legal Form’ is a ‘Cautionary Tale,’ says Justice.”  The Justice referred to would be a member of the Florida Supreme Court in the opinion rendered in Basile v. Aldrich on March 27, 2014.  The really basic problem with the “will” executed by the decedent is that it was missing a very elementary part – a residuary clause.

I often tell clients in an initial interview that since we don’t know a couple little details like . . .  when we’re going to die and what we are going to own at the time of our death, a residuary clause can be very helpful indeed.

The basic problem with the E-Z legal form will was that it wasn’t much of a will, in fact it was what might be called half-baked.  It contained a listing of specific devises (gifts) to particular people, but didn’t contain a residuary clause to cover anything and everything else not listed specifically.  So Ms. Aldrich’s will was effective for the specific devises listed and ineffective for the remainder of her estate.  As a result, there was a determination of partial intestacy due to what is known as after-acquired property because there was no residuary clause to give any unnamed property to a named person.  So what Ms. Aldrich got was some of her property going via her will and the remainder of her property passing via Florida’s law of intestacy.

What governs much of the law in this field is testator intent – what did the person making the will intend?  Unfortunately, these forms can unduly complicate this determination and can lead to a myriad of unintended consequences.  How can we tell what someone intended when there is such a mess?

While most all of us appreciate simplicity, what looks good on paper to someone who isn’t familiar with the basic components of a valid will can lead to disastrous results.  I got a call once from a prospect who told me “I want a one-page will.”  I responded “you can write it yourself.”  Colorado law recognizes that frontier relic known as the holographic will, which is

a testamentary instrument that is written entirely by the testator in his own handwriting and signed by him and that even if unattested is usually recognized as a valid will in most jurisdictions.

For research for this post, I did look at a couple online purveyors of cheap will forms.  They had nice pictures and some good tips, but really didn’t explain much about what a will is and how it works. But wait, maybe they’re relying on the conventional wisdom that “everyone knows what a will is.”  Not so fast!  The basic problem is that when it comes to writing a will, most of us may not want to use those same simple provisions that are “generally applicable” to everyone and therefore of particular value to no one.  A testimonial given for one of these document generation services described how easy the process was.  Caveat emptor: There is easy and then there is simple.  Will easy work for you as you think it will?  How will you know?  The basic problem with the document generation services is that the human element (communication) is left out.  There is no interviewer asking you questions you might never have thought of or explaining how some common things actually work. But wait, there’s more.  . . . !  I also noted a satisfaction guarantee, lifetime customer support, and a $50,000 guarantee. I read the fine print of the guarantee, typos and all, and noted that the company retains the right to change the guarantee at any time.  Hmmm….

In my 2013 April Fool’s post, I included some fairly hokey pictures of “zombies” along with a serious set of questions about these types of services, which I likened to “zombie law practice.”  I recently received a call from a prospect who asked me point blank – why should I hire you instead of going online for one of these services? So I will include just a couple points from that zombie post of mine:

We lawyers understand that we often bore our clients with describing the important processes we go through to arrive at a particular result.  I know I am one of them.  But we also need to explain the process so that the client can see and appreciate the value inherent in it, how that process is going to get them to where they want to be (or out of where they don’t want to be).  This is why just filling out some cheap form is often like shooting yourself in the foot (or worse).

One last thing that I don’t mention, but that several of my colleagues would respond with is – pay us now or pay us later . . .  to clean up the mess resulting from the badly drafted “planning documents.”  Sadly, some of these messes can’t effectively be cleaned up – the harm to relationships can be irreparable.

Each of us is free to have a will or no will at all, but if you decide to write your own or go online for a “cheap and easy” will, wouldn’t you rather know that you are making an informed choice among viable alternatives?  Under the Colorado Rules of Professional Conduct, attorneys must provide clients informed consent to a particular course of representation.  This means an attorney must educate the client about alternatives so that the client can make an informed decision about how the client wants to proceed.  You won’t get any of this with a “cheap and easy” will drafting service!

Like Loading...
2 comments to “The Pitfalls of the E-Z, D-I-Y Online Will Form – From A Recent Florida Supreme Court Case”