It’s springtime somewhere, but definitely not in Denver this morning where the snow from Monday’s storm has melted only a little.  I got a blizzard alert on my iPhone at about 7:30 this morning!  It’s coming down right now.  We do need the moisture and I, for one, am not anxious to get started on the lawn mowing anytime soon. . . .  So here’s a picture of spring that I took last week in Ireland. 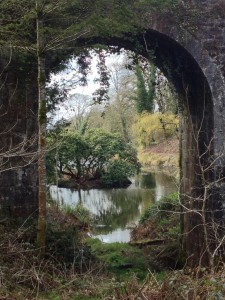 For all of you skeptics (or people who have been to Ireland before) the weather was beautiful and I took many pictures with visible blue sky! I took this picture on the grounds of Glenstal Abbey, where I was lucky enough to spend several days in a warm and welcoming Benedictine community.  I took this picture after walking back from a visit to Mass Rock.  There Irish soprano Noirin Ni Riain told our group about the history of the Mass Rock. She alo sang to us and finished by leading us in song.  She has an amazing voice and her music not only speaks to the soul, but moves it.  I purchased three of her CD’s when I was there and they are all available from Sounds True in Boulder.  Her songs are sung in Irish, but I find that the most moving music is not in my mother tongue of English.  I’m also thinking of Gorecki’s Third Symphony which you can listen to part of it (with beautiful visual accompaniment) here .  My favorite is the original million-seller with soprano Dawn Upshaw.

Music and spring and travel. . . .  That leads me also to an experience I had some years ago when I was visiting a local nursing home in my capacity as JFS para-chaplain.  I was there to lead a service and because I was lucky enough to be accompanied by a guitarist, I sang an old Yiddish song called Oif’n Prippitchik.  About midway into the song something very interesting happened.  One of the residents who attended was a woman with very advanced dementia who, it was reported to me later, had not spoken in over a year.  She started first to hum and then sing along with the song.  She spoke about her grandmother.  The song had transported her right back to a happy memory of childhood, when her grandmother had sung that song to her.  By the means of music, hearing that melody – she was moved in a sort of time travel.  I was most certainly moved witnessing that event.  Another story of music as a means of transport for the spirit comes to mind, it is from Megory Anderson’s book Sacred Dying.

So this post is about connections I suppose, and the beauty of writing blog posts is that I can incorporate things like . . . . a bumper sticker that I saw this morning on my way to work.  It read “love lasts longer than life.”  I nodded in agreement.  This post is also about new varieties of living arrangements in this country, which hearken back to some very old traditional arrangements.  I thought about the post after reading an article about it in the April 2013 AARP bulletin.

The title of the April Bulletin’s article is “Saving Money by Living Together,” and it is about money saving, but I suspect that the approximately 51 million Americans who live in a house with at least two generations in a single home, and many of these most likely have three generations, are enjoying more than just money savings from the arrangement.  The money savings factor in substantially for caring for an elder parent, and the arrangement also give an adult child or children the opportunity to give back to the aging parent some of the care they received from childhood.  This can be a beautiful way of modeling productive multigenerational relationships for young children.   I think it also can foster a productive stage of elderhood for many grandparents, a topic I’ve blogged about previously.

One of the biggest challenges that we face as a society is how to take care of the burgeoning number of elders, some of whom have meager savings and many whose savings have simply run out over the course of a long number of years of paying for health care not covered by Medicare and costs of living in retirement.  I sometimes hear the offhand lament “we don’t take care of our elders in this country,” to which I often quickly respond with the numbers of elders and the fact that the vast majority of those elders needing care receive some or all of their care from unpaid family members.  One of the side effects of longevity is reworking family relationships to support elders in their later years.  As an estate planning and elder law attorney, there are a number of legal arrangements that an individual and family can put in place to manage the legal aspects of these often complicated financial, medical and emotional considerations.  In a multigenerational housing arrangement, it is good to start with a plan.  I liked this article’s list of tips for making such an arrangement work which include:  discuss expectations and responsibilities like financial and privacy issues; talk about parental and filial (adult child to parent) responsibilities; check zoning restrictions about renovations for attached dwellings; and share the responsibilities.  I would also add that it might be wise to have a regular place for the family members to meet all together to ensure things are working and so any conflict can be managed productively and not allowed to proliferate.   Some of my clients have made such arrangements and they are usually mutually beneficial.  It is interesting to note the change in structure that economic and age-related considerations can have for families – for so many of us, it brings our dear ones closer to us.