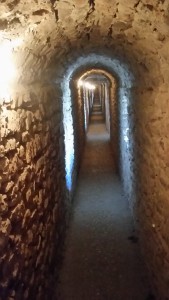 Inside the Rocca Maggiore

This is the first of a series of posts about our death-denying and death-phobic culture and the “usefulness” of a psychopomp as a means of understanding the meaning behind the denial and the denial of meaning.  If using the psychopomp seems like an odd choice for such a journey, please bear with me and know that these posts will be concerned with the meaning that is behind the fear and the denial.

To review briefly, a psychopomp is a conductor or guide of the dead to the world beyond this place.  In this respect, the purpose of the psychopomp is to accompany and sometimes convince a person who has died to let go of the familiar of this world – a person’s identity, expectations, possessions (physical and non-physical), status and many other types of “evidence” of our existence here in the life one has grown accustomed to living.  Just as most of us can remember being afraid of the dark, many of us are also afraid of the light.

I would begin with the observation that questions about the meaning of life and the significance of death often seem strange and foreign to us.  It strikes me that this is because these questions are part of the human condition but somehow – and quite effectively, according to our post-modern reductionist mainstream thinking, obsessed with the material world as the only “real world” – we have rejected such questions as impractical navel gazing.  This notwithstanding the fact that for all of human history, the meaning of life and its significance, have been among the principal problems of philosophy.  Only in our recent “scientific” post-modern era, have these questions and their meaning been declared to be meaningless.  I think of Dostoevsky here:

Man needs the unfathomable and the infinite just as much as he does the small planet which he inhabits.

Denial of death is essentially the denial of any meaning in death.  What is the consequential impact of such denial on any meaning of life?  Can the psychopomp assist here or is s/he merely an enabler of our fear of death?  Is death denial different from a belief that death is not “real?”  What if it is all part of the same mish-mashy stew – as observed by one author that “the affirmation that death is not real, that man has a soul and that this is immortal, arises out of a deep need to deny personal destruction, a need which is not a psychological instinct but is determined by culture, by cooperation and by the growth of human sentiments.” Theodosius Dobzhansky, The Biology of Ultimate Concern, at 78 (1967).

I think there is an important distinction to be made here between first, the  death denial as  denial of the fear of the unknown, the incapacity of our post-modern mindset to come to grips with reality beyond the objective and measurable and therefore to dismiss its existence and any attendant meaning, to basically pretend it isn’t there.  This is distinguished from the second kind of death denial in which the psychopomp may, if you will, play a role.  This kind of death denial is qualitatively different as it lends meaning to death as a form of the unknown, giving significance and substance to the mysterious transitions of this life – birth, death and all the transformations of self in-between.  Death here in the second type of fear/anxiety is simply part of life – accepted or not, it happens to all of us.  But what of the meaning of our dying?  Well, this is where I rely on psychopomp.

I think that one of the biggest problems we face, whether it is in the grips of illness, aging, disability or dying – is the meaning of our living and being here.  I propose death is like a mirror or our transitory and impermanent existence in any particular form.  Death denial is different from the fear of death (thanatophobia), and it in turn is distinguished from necrophobia – the fear of the dead.  The former is really a kind of anxiety more than it is a fear.  As a kind of fear, it is specifically a fear of the unknown, as none of us knows the manner of our death.  What does the fear mean in itself and what does the existence of the fear mean?

I like what Vassily Kandinsky wrote about white and black:

[w]hite,although often considered as no color (a theory largely due to the Impressionists, who saw no white in nature as a symbol of a world from which all color as a definite attribute has disappeared) . . . This world is too far above us for its harmony to touch our souls.  A great silence, like an impenetrable wall, shroud its life from our understanding.  White, therefore, has this harmony of silence . . . like many pauses in music that break temporarily the melody.  It is not a dead silence, but one pregnant with possibilities.

A totally dead silence, on the other hand, a silence of no possibilities, has the inner harmony of black. . . Black is something burnt out, like the ashes of a funeral pyre, something motionless like a corpse.  The silence of black is the silence of death. . . . Not without reason is white taken as a symbolizing joy and d spotless purity, and black grief and death.

We navigate the world of the unknown every morning when we arise from sleep.  But yet, the unknown of death and dying seem insurmountable to many of us.  What if we draw on something familiar for our psychopomp, say . . .  the family dog?  In her book “Women Who Run With the Wolves,” Clarissa Pinkola-Estes observed that “[t]his little dog (in the Manawee saga) as psychopomp represents the instinctive psyche.  It hears and sees differently than a human.  It travels to levels the ego would never think of by itself.  It hears words and instructions that the ego cannot hear.  And it follows what it hears.”  C. Pinkola-Estes, Women Who Run With the Wolves at 131 (1992).

I will conclude this introduction to the series on the work of the psychopomp here with something hopeful perhaps – that the fear of death is essentially the fear of life, that our fears of being separate and distinct from others and our human need to belong derive meaning only from engaging in relationship.  That relationship can make possible the broader and deeper meaning and give meaningful context to the mysterious purpose of our existence.  I like Richard Rohr’s description of “life as mutual participation” (from his book “Eager to Love” at 234 (2014)) and I wonder why this participation would cease with one’s physical existence.  But that’s in another post. . . . !