Here is a picture of some physical evidence of springtime from my front yard.  It’s a new home I moved into in the late fall, so I am very happy to see these neighbors! 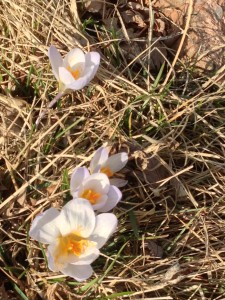 As I walked around Ketring Lake late yesterday afternoon, I was pleased to hear the familiar sound of the red-winged blackbird.  I knew spring had officially arrived.   This spring brings important legal changes in Colorado.

We are reformers in spring and summer; in autumn and winter,

we stand by the old; reformers in the morning, conservers at night.

Last week (on the first day of spring), Governor Hickenlooper signed SB 13-011 into law.  The new law is titled the Colorado Civil Union Act, and same gender couples can get “hitched” as early as May 1, 2013.  Read the text of the new law here .

Colorado is the fifteenth state to recognize same-sex marriage or civil unions (in which partners are treated as spouses) and is evidence that we have come a long way since Amendment 2 in 1992.  This post will be split into two installments – the first one to take an overview look at the new law, and the second to explore it  in more detail and look at the impact on the designated beneficiaries law.

With the passage of SB 13-11 and its signing by Governor Hickenlooper last Thursday, same gender couples will be allowed to become partners or parties to a civil union (I prefer to use the term “get hitched”), and these partners will be treated as “spouses” for all intents and purposes under the law of Colorado.  The statutory language of the Civil Union Act is careful to not create or be construed to create a “marriage,” which is defined by the Colorado constitution (this was Colorado Constitutional Amendment number 43, voter approved in 2006) as the union of one man and one woman.  Yes, you can guess that we estate-planning lawyers who get together for our monthly Probate Day at the Colorado Bar Association will be working on revamping our forms.  There is a recently formed subcommittee of the Orange Book forms committee that will be looking into revising our Colorado estate planning forms book so that the meanings and usage of the term “spouse” are consistent.  Persons who get a civil union license certified by the clerk and recorder will also be subject to the same procedures for dissolution as spouses.  Taxes are another matter, however – the statute does not contain authorization for the filing of joint state taxes and federal law does not allow such joint filing.

This is really a sea change for same-gender partners, who previously had to forge their own legal relationships to provide evidence of their relationship and protections for each other and their family because the law in many respects treated them as “legal strangers.”  The Civil Union Act changes all of that.

Another important development is taking place right now.  Oral argument in the Windsor v. United States case before the U.S. Supreme Court has concluded.  You can read SCOTUS blog coverage about it here.  That suit challenges the federal Defense of Marriage Act (DOMA), and the Supreme Court’s decision can impact the rights of same gender couples under federal law in many important ways.  I mention the DOMA law because Colorado was one of the states to amend its constitution to recognize “marriage” as between one man and one woman.  Colorado Const., Art. II, sec. 31.  This was as a result of Colorado Constitution Amendment 43, voter approved in 2006.  Its definition of marriage precludes use of marriage and necessitates “civil union” and also allowed for Colorado to decline to extend full faith and credit to a same-sex marriage from another state.  The DOMA accomplished this by allowing states to choose to not extend full faith and credit to another state’s legally recognized marriage.

Let’s take a look at the Civil Union Act for an overview.  It authorizes any two unmarried adults, regardless of gender, to enter into a civil union.  In order to accomplish this, parties wishing to enter into a civil union will apply to the county clerk and recorder for a license, and once the license is obtained, it must be certified within thirty-five days and returned to the clerk and recorder within sixty-three days of certification.  This is the same timeline as applies for marriage licenses and recording time solemnization.  The persons qualified to certify a civil union are the same as those qualified to solemnize a marriage and include the partners themselves.  With regard to dissolution of a civil union, the laws of Colorado will apply to civil unions entered into in Colorado as well as to those recognized by this state effective May 1, 2012.  Partners will have to follow the same rules of dissolving their marriage as married persons.  Indeed, the third stated purpose of the Civil Union Act is to offer same-sex couple the equal protection of law and give full faith and credit to recognize relationships that were legally created under another state’s law – similar to a civil union but which would not otherwise be recognized under Colorado law.  Important legal principles of extending full faith and credit to another state’s laws as well as comity factor importantly in this new law.

To conclude this first installment, let me focus on the estate and elder law implications – here are a few things to note:  Title 15 of the Colorado Revised Statutes  (Probate, Trusts and Fiduciaries) references to spouse will include partner or party to a civil union; note that “spouse” will include partner in the Colorado Medical Treatment Decision Act (Colo. Rev. Stat. 15-18-101 et seq.); the spousal privilege under evidentiary rules will extend to partners to a civil union; a child born during a couple’s civil union will be the child of both partners; and partners may enter into marital agreements (commonly referred to by the slang term “prenup” – but Colorado recognizes such agreements after becoming spouses – which would also include a “postnup”).