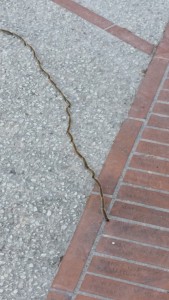 My posts about reporting elder abuse remain my most popular among readers and since it’s been a while since I’ve written on the topic, I thought it was time! I get regular calls from people about this question, often from adult children who are concerned about what is going on with a parent.  Plus, I listened to a webinar put on by the ABA last week about recognizing and preventing these scams.  Today I’m focusing on federal programs and resources.  Here’s a link to the US Department of Justice (DOJ) Elder Justice Initiative to get started.

Among the presenters at the webinar were a representative from the Consumer Financial Protection Bureau (CFPB) and a prosecutor from the US DOJ Civil Division’s Consumer Protection Branch.  I mention these two federal resources because most of us tend to focus only on local or state law enforcement when it comes to reporting suspected financial abuse or exploitation of an elders.  One other recent detail popped up on a listserve recently, reporting a scam concerning what was represented to be an “escrow company” to the victim and who told her they were assisting in the sale of her time share in Mexico.  Apparently tens of thousands of dollars were cumulatively wired to the scammers, for the purported purpose of covering taxes and transaction fees.  I searched online and found several posts about these types of scams that sound like perfectly legitimate businesses.  One of these scammers was using the name of a legitimate Colorado business.  Couple this with a scammer’s ability to “spoof” a phone number on the recipient’s caller ID, and it’s a pretty dangerously convincing mix!

The scammers are as familiar as the rest of us with the adage “if it’s too good to be true it probably is,” but some of these scams persist, coming in many new and different forms.  The more troubling scam scenario however is the much more legitimate sounding scam, which doesn’t purport to be a “sure thing,” but instead rely on a common human tendency toward “in for a penny, in for a pound” behavior, or what economists refer to as sunk cost fallacy and psychologists call commitment bias.

Many of these scenarios involve mail fraud and wire transfers.  Read a recent press release from the DOJ about actions concerning mail schemes targeting by foreign nationals.  Last March, the CFPB issued an advisory and a report with recommendations for best practices for banks and credit unions on “how to prevent, recognize, report, and respond to financial exploitation of older Americans. Financial exploitation, the illegal or improper use of a person’s funds, property or assets, is the most common form of elder abuse and costs seniors billions of dollars per year.”  The Advisory, which contains recommendations concerning the development of internal controls for the protection against and reporting of exploitation, training of staff to prevent , detect and respond to elder financial exploitation and using appropriate technology for the detection and reporting to local, state and federal authorities, is available here.  The executive summary of the CFPB’s report begins with an important message:

Elder financial exploitation has been called the crime of the 21st century and deploying effective interventions has never been more important. Older people are attractive targets because they often have assets and regular income. These consumers may be especially vulnerable due isolation, cognitive decline, physical disability, health problems, or bereavement. Elder financial exploitation robs victims of their resources, dignity and quality of life—and they may never recover from it.

You can read more of the report here.

There are many ways that scammers defraud elders and some of these include Medicare, Medicaid and health insurance fraud (which is akin to a form of identity theft), IRS and tax scams, mail fraud and internet scams involving “sweethearts” and online dating, sweepstakes and lottery “winnings” and tech support scam.  The Justice Department also has a helpful roadmap identifying what type of scam and which federal agency to which it can be reported.

One valuable thing for people to consider in reporting an incident of suspected elder financial abuse and exploitation is this: a single victim may not have suffered a devastatingly huge loss, relative to their life savings perhaps, and it may even have been a relatively small loss, but if it is multiplied among a range of victims nationwide, what the scammers take can amount to millions of dollars.  This is why reporting remains critically important.  We are charting new ground here as many facts and figures about the incidence and forms of elder financial abuse and exploitation remain unknown due to underreporting.