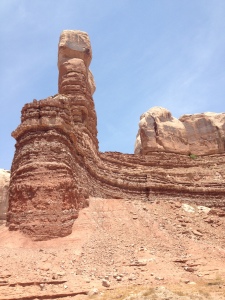 This is a picture taken outside my favorite fry bread restaurant, in Bluff, Utah.  The Navajo Twins, the rock formation depicted (and name of the restaurant), is named for the hero monster-slayers from the Navajo creation story.   Their story has also to do with the coming of death.

Some of us question basic notions around things like life and death.  Others, well . . . not so much.  Historically, we have symbols, guides, talismans and other “companions” who have accompanied us on the journey from life to death.  Whether you view it as a dark path of mystery or simply as a “lights out” simplicity of sorts, death is the great unknown.  Some of us feel more comfortable with a guide or at least a worthy companion for the journey.

Who will help us along our journey, who or what will guide us along this unknown path, the strange terrain of transition that is so foreign to us and around which there is much anxiety and fear?  Is there some post-modern guide for our purposes here?  I have used several pictures from Rochester’s Mount Hope which depict angels, who are probably the most readily recognized psychopomps in our culture, even if they seem, for many of us, outdated.  The most recognizable psychopomp in literature is Virgil from Dante’s Inferno.  Virgil conducted Dante through the nine circles of hell.  Nowadays there are so few authorities recognized for such a role as psychopomp, there are many different names for such roles or services.  In many traditions, coyote is a psychopomp.

As indicated above, the origin of the term psychopomp derives from Greek mythology, and denotes a spiritual guide of souls, traditionally to the place of the dead, but often also as a guide at the threshold of other mysteries as well.  For the alchemists, this person was Hermes Trismegistus and for archetypal psychology is often expressed as the magician. [Here I am relying on Carol Pearson’s 1991 book “Awakening the Heroes Within, at 193-208.]   In Jungian psychology, the psychopomp is the mediator between the realms of the conscious and the unconscious.  Sometimes a simple question is asked of us and this changes everything, like a missing puzzle piece brought into one’s life, which is no longer merely an intellectual question.  I’m thinking of the question posed to Parsifal in his search for the grail, “whom does the grail serve?” which caused his lost soul to realize that his divine counterpart (the grail king) had been living within his castle all along.  This is, as Monika Wikman describes it in her 2004 book “Pregnant Darkness,” (at 182) is mystery that is brought to life, embodied and is the carrier of the connection between the human ego and the divine self.

Going back to the beginning of the beginning as it were, my favorite story is the tale of the journey of Inanna, the Sumerian goddess of heaven and earth, to visit her sister Ereshkigal, the goddess of the underworld.  Sylvia Brinton Perera’s 1981 book entitled “Descent to the Goddess” is a beautiful rendering of this path of transformation and a woman’s inner journey by a highly respected Jungian analyst.

Let’s face it, most of us don’t remember these stories about questions, transitions and guides, or we had no use for them, so have we simply managed to forget the psychopomp and why a culture would have found one useful in the first place.  Perhaps that is the case.  It is probably more likely that in addition to forgetting the purpose of such a guide, we have transformed the notion, the metaphor, to fit our modern and post-modern necessities.   So, enter the psychopomp of the extra-terrestrial!  We still venture to the land of imagination and fantasy, to the strange, mysterious and uncharted worlds.  The command of Star Trek’s Captain Kirk to engineer Scotty “beam me up” comes to mind.  But if the angels of yore have become outdated in the modern and post-modern expression of technology, then it strikes me that the extraterrestrials are our more fully mechanized and measured angels.  The psychopomp is after all a threshold conductor, not something that is out there but is part of a relationship we have (each of us has) with the unknown.  In our space exploration, aren’t we essentially looking for relationship, to help us inform ourselves further about who we are, in relationship to _X_ (the unknown)?  Our fascination with UFOs is also about our relationship with mystery and that sought-after psychopomp.

Maybe we are reaching a point of unbearable tension between the progress of technology and what it is for – read: the expansion of consciousness.  What is the name of this new place and what is the human role in it?  Is it fully mechanized, an objective reality apparent to everyone  . . . .  or is it something or someone that has soul? Well, I think the new place is the latter because I tend to side with the ancient Heraclitus on this turf, that all the world is merely a cover, a means of thinking about boundless soul.  This is one of the reasons I think it is particularly helpful that we have people like Megory Anderson, whose book published in 2001, Sacred Dying, explores the re-animation of embrace of rituals surrounding the end of life, dying, death and mourning.  When we can engage is a ritual that is meaningful to us, we can discover our intention to be present – to ourselves and to the dying and others present, in ways that connect us with ourselves and the other, as a balm for the rampant anxiety and alienation that is so commonplace in our end-of-life situations in our post-modern Western, north American culture.