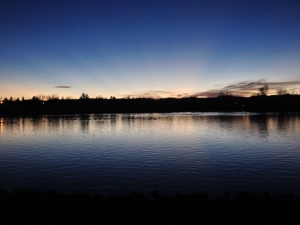 This is a continuation of my previous post about “where do we put our dead?” but I am in fact beginning at the end (depending on how you look at it of course!) with the aspect of dying and how this factors into our death denying culture.

In chapter 12 of The Hour of Our Death, entitled “Death Denied,” Philip Aries introduces the chapter with “the beginning of the lie” in which he draws upon ample support in literature for this new development and the beginning of the medicalization of death, which of course persists today.  Looking at Tolstoy’s Ivan Ilyich written in the 1880’s, Aries notes the similarity of the medical lie that cheats one out of one’s own death with an experience he recorded of a priest dying in 1973.  He notes next the progression of the denial into what can be considered many aspects of its present states – the developing and deepening “death taboo” as described by the Englishman Geoffrey Gorer in 1963 (Aries at 575); its emphasis on discreet funerals, a certain indecency of mourning; and as the unwillingness to speak about the inevitable deepens, there enters the triumph of medicalization – the ultimate in estrangement from and incapacity to reckon with one’s own death.

I’m thinking also of another work, this one by B. Hayslip, Jr. and C. Peveto, “Cultural Changes in Attitudes Toward Death, Dying and Bereavement,” (2005: Springer) in which the empowerment and disempowerment choice is presented squarely to the patient in the medical setting.  The question examined included three with widely varying responses, which were further broken down along ethnic/cultural affiliations among Americans.  Most of the respondents stated they would want to be informed by a doctor that they were dying, while fewer responded that it was as important for others, such as family members, to be informed.  The most interesting number was the very small – 4-7% of respondents who related that they had told another person they were dying.  Hayslip and Peveto at 7, 114-15.  Here there is more than ample evidence to let the medical establishment do the “heavy lifting” as it were, relating to communicating a person’s imminent demise.  Age and ethnicity play important roles in how a person, as a member of a community views illness, mortality, old age, dying and disposition of a body and the grieving process attendant to that.  Id. At 78-84.

So with the medicalization of death we have other factors, whether they are causal or correlative is a question for social scientists to research.  What was once a basic fear, as writers like Ernest Becker put it  – the fear of death – has now become complicated with the alienation attributed to the medicalization of the dying process and our estrangement from it as a natural process, as part of life.  The fear is complicated now by an unspeakable anxiety which makes the fear into something much bigger and more complex than it is.  Of course, the medicalization of death is not a factor in death denial in many more traditional cultures and there are important developments in our country relating to the backlash against all of the medical intervention (but then that is another topic!).  Bottom line for my purposes here is that the medicalization of death has contributed to our sense of powerlessness and alienation from our own death and the death of others.  You might of course observe that the sense of powerlessness over death has always been with our kind and I would of course agree, but the alienation and its particular form is both a modern and post-modern phenomenon which I find particular troubling and symptomatic of a greater loss.

Finally, I will take a look at the so-called “green alternative” to burial: cremation.  Both of my parents wished to be cremated and their cremains are inurned at Ft. Logan.  My challenge with cremation is that it seems to be a further extension of the alienation from death.  The body is dispatched to the funeral home or mortuary, which may or may not have its own crematory on site and if it doesn’t sends the body out to another facility for such purpose.  I am reminded of my late aunt’s comment “just cremate me,” which struck me as being similar to “just take out the trash.”  I loved my aunt and found the comment upsetting at the time, even if I didn’t have any qualms with her cremation following her death.  I can’t tell you how many clients I have talked to about cremation and the rather unique issues it raises that many folks have not previously considered during the past where burial at a particular location was the unstated choice for nearly all people.  What container will hold the ashes?  Where will they be kept?  Who will keep them?  What happens to them when something happens to the custodian of the cremains? While cremation affords many more choices than burial to answer these questions and uniquely express the deceased person’s wishes, more often these questions are never answered and people can get stuck with their ex-wife’s uncles remains. . . . !

I haven’t had the chance to watch this PBS series called Dying in America from 2004, but you can watch it here.  Crematory workers are not immune from graverobbing so to speak, a New Jersey funeral director was convicted of selling body parts, while a German crematory employee was allowed to keep the proceeds from some eight years of sifting through cremains for precious metals (to the tune of $800,00.00) because a court ruled that such property belonged to no one.

I guess the biggest issue I have with cremation is the anonymous disposal of the corpse.  The corpse is typically dispatched by strangers hired by the family and the operator of the incinerator is the sole witness to the final dissolution of the deceased person’s physical being.  Yes, it does hasten the ashes to ashes transition, but I have reservations about how the process is undertaken, as if the body as a container is deserving of very little respect.  I just did a search and found that there is a funeral pyre in Crestone, Colorado.  This makes the cremation a public event, as practiced by Buddhist and Hindus of today and a different choice for cremation.

So I’ll end this post with something a little more upbeat (perhaps).  Fresh off the internet . . . Here are the top ten “classic” (I read that as dinosaur) rock songs about death:

Keep Me in Your Heart by Warren Zevon.  I’ve previously posted a link to the youtube of this beautiful number, which Zevon wrote in the face of his own mortality (he had terminal cancer)

Knocking on Heaven’s Door (okay, I switched this fave of mine from another Dylan tune that was listed)

The Wreck of the Edmund Fitzgerald by Gordon Lightfoot, a beautiful ballad that takes the listener back to a seemingly different time and a relationship which most of us don’t have with tragedy

The Show Must Go On –  by Queen. I watched this video of the meaningful song performed by frontman Freddie Mercury as he was growing progressively weaker with AIDS

In My Time of Dying – Led Zeppelin

Tears in Heaven by Eric Clapton

42 – by Coldplay . . .  okay, it’s not classic rock but it’s a band I really like and the number 42 happens to be, as revealed in The Hitchhiker’s Guide to the Universe, “the answer to life, the universe and everything.”

Don’t Fear the Reaper – Blue Oyster Cult (this was #1 on a list I found but I remember this from high school and all the vampire movies popular at that time, so it got demoted in my listing!)