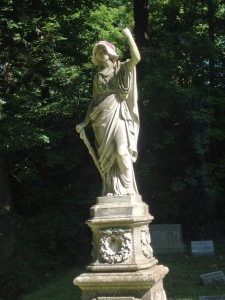 After a couple weeks off from blogging I am back.  No, they weren’t actually planned that way, these things do happen and I do my best to regard these occurrences as kairos!  The word “cemetery” has many different meanings and connotations.  The online Merriam Webster refers to its origins as coming from the Middle English cimitery (derived the from Anglo-French cimiterie).  Its Latin origin is coemeterium and from the Greek koimētērion  meaning sleeping chamber, burial place, from the verb koiman to put to sleep. It traces the word’s first known use to the fifteenth century, but it seems natural that this word being based on the Anglo-French would have had an earlier iteration.  Cemetery is translated in German as Friedhof, a court or place of peace.

Cemeteries are a kind of public park, perhaps before many communities had such a thing (except perhaps for grazing cattle).  In this country, one source has named 1831 as the year the first cemetery was founded, with the  construction of Mount Auburn Cemetery in Cambridge Massachusetts.  I have featured another picture from Mount Hope in Rochester, New York, which was founded in 1838.  You might be wondering what larger European cities have done with all their dead.  Perhaps you have visited “the catacombs.”  A catacomb is simply an underground cemetery, a place for putting away human remains that was first built by the (ancient) Romans.   Of course there were Romans in Paris, which was then called Lutece.  Some of the more famous catacombs are those of Paris which are comprised of more than two hundred miles of tunnels, some lined floor to ceiling with bones and skulls.  Here’s a link to a cool picture of that along with some fascinating history of the bones of between six and seven million persons.  Compared to the elaborate cemeteries that are found in so many cities, catacombs seem to be a great “equalizer” in terms of the anonymity of the dead.  In addition to the underground catacombs in many European cities there are numerous ossuaries, rooms into which the bones of the dead are place.

So how did communities historically dispose of their dead?  In many parts of the world, this remains a mystery because there often doesn’t appear to be any historical record or evidence of of really old cemeteries or burial grounds that are identified as such.    Back to the title of this post – so how did we move from charnel hill to churchyard or memorial park?  What began perhaps as a memorial park in some communities might have been overtaken from the natural place of rest and continuity, of perpetual home to a display of ornate stone and limited and managed natural surroundings, all neat and tidy perhaps with nature and its processes seemingly kept at bay.

In addition to the public health aspects of managing the dead and the dying, their dispostion is now well-regulated in all of our states.  This includes the move from what were once private arrangements taken care of by family members to the consumer-driven service industry of providers of mortuary and funerary services.

Part of the legal protections surrounding the dead has evolved along with how we  think of and how memorialize the dead.  There are international law protections relating to corpses which grew out of international law as reflected by our long history of warfare between nations and of course civil wars.   The legal status of a corpse is in most respects as that of property, but there are important distinctions to be made.  Here is a link to a 1997 article in the Whittier Law Review about necrophilia.  Jeffrey Dahmer is the most infamous modern sufferer from necrophilia.  Such laws relating to corpses, to the extent they exist and are enforced, uphold our moral compass and social respect for the dead and our treatment of the dead with dignity and respect.  Desecrating, plowing over or covering up graves is a criminal offense.  Hate crimes are often extended to a victim’s grave, often targeted for the victim’s race or religious affiliation.

Concerning the cemetery, many factors came together in different ways across cultures to allow for the placement of the dead within the community.  Perhaps in many ways cemeteries are places where the dead can be “kept” so as not to be free to wander about and disturb the living.  The final resting place should be one that is afforded respect so that there is no need for the dead to disturb the living.  It is essentially a segregation between the living and the dead.  In many religions there is the idea that the living and the dead will be reunited – I’m thinking about Mircea Eliade’s reference to the Lakota ghost dance in Death, Afterlife and Eschatology (1967: Harper & Row) at 85.  And lest we forget for those religions which have a messiah, the significance of the sealing of the Golden Gate in Jerusalem by the Ottoman Sultan Suleiman the Magnificent in 1541, in which it is said the Ottomans constructed a cemetery outside it so as to prevent the entrance of the Messiah.

So back to the cemetery and the angel depicted above.  In his work tracing the attitudinal changes of the western tradition’s approach to death and dying, Philip Aries describes in The Hour of Our Death (1981: Knopf) at chapter ten, entitled “The Age of the Beautiful Death,” a release from suffering and an end to toil at the end of a life.  In this chapter which has numerous references to literature of the period, including letters and journals from a French family, the writings of the Bronte sisters, the rise of spiritualism and other cultural phenomena from the 18th through the early part of the 19th century.  I will be continuing this post soon.

So, I couldn’t pass up this opportunity for a YouTube serenade, this one with Saint-Saens’ Danse Macabre . . . (Opus 40, first performed in 1875).