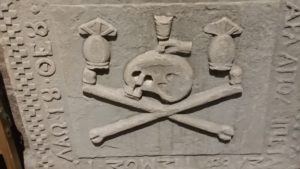 Memento Mori: Remember Death, That You Will Die

Last weekend I attended the International Death Symposium in Toronto, Canada. I went with a friend who is a Canadian death midwife.  We both enjoyed it. It was a rather extraordinary place to be, amidst an entire community of folks committed to dispelling the death taboo.  The presenters and attendees were Canadians mostly, some Americans and an Irishman who spoke eloquently about his father’s death and wake.

So, what is conversation anyway?

2a(1) : oral exchange of sentiments, observations, opinions, or ideas

… we had talk enough but no conversation; there was nothing discussed.

(2) : an instance of such exchange : TALK; a quiet conversation.

Of course, I couldn’t mention “conversation” without a reference to The Conversation Project, which is a very useful tool to help people (like many of my clients) toalk about the end of their lives and express their wishes and values around that part of life.

In this post, I’ll share a couple highlights from the symposium. One of the “rocks stars” who presented was BJ Miller, a hospice doctor from San Francisco.  You can watch a video here about the “problem of death” in our medical delivery system.  Part of his presentation at the Symposium addressed the conflict of aesthetics of caring for the dying and the widespread use of anesthesia.

My late mother, an R.N. who received her nurse’s training through the Nurse Cadet Corps, would have been thrilled to hear an M.D. make reference to the work of a nurse.  The nurse was none other than Florence Nightingale, the “mother of nursing,” who wrote about the aesthetics of caring for patients.  Miller contrasted Nightingale’s insistence on aesthetics – a set of principles concerned with the nature and appreciation of beauty – with the current widespread use of anaesthesia (or anesthesia in the US) which is the numbing or rejection of aesthetics in favor of

Insensitivity to pain, especially as artificially induced by the administration of gases or the injection of drugs

In this place of intersection between our ability to sense and perceive beauty with the selfsame capacity to sense pain, what do we make of our commonly accepted and pervasive use of drugs in this country (and so much of the west) to numb us down to “ease our suffering” regardless of where in our lives we encounter that suffering?  It could be at the end of our life, somewhere in-between for a surgical procedure, or it could become a lifestyle treatment for anxiety and depression.  Does it matter where the suffering occurs for which we seek anesthesia?

Isn’t the pain of dying just the pain of living at a time of greater uncertainty?  Why do we pretend we can draw the distinction so clearly –  particularly during a time of unprecedented numbers of people dying of drug overdoses?  I’m not talking about the present opioid crisis – a recent study has shown that our current opioid overdose epidemic actually began forty years ago and has been increasing – exponentially – since then!

How and why we distinguish between the pain of living and the pain of dying . . .  well, that’s a topic for another blog post!

Because I could not stop for Death –

He kindly stopped for me –

The Carriage held but just Ourselves –

We slowly drove – He knew no haste

And I had put away

My labor and my leisure too,

We passed the School, where Children strove

We passed the Fields of Gazing Grain –

We passed the Setting Sun –

The Dews drew quivering and chill –

For only Gossamer, my Gown –

My Tippet – only Tulle –

We paused before a House that seemed

A Swelling of the Ground –

The Roof was scarcely visible –

The Cornice – in the Ground –

Since then – ‘tis Centuries – and yet

Feels shorter than the Day

I first surmised the Horses’ Heads

From The Complete Poems of Emily Dickinson, Thomas Johnson, ed.

That’s all for now, next time I’ll post about the Phone of the Wind, a.k.a Kaze No Denwa …