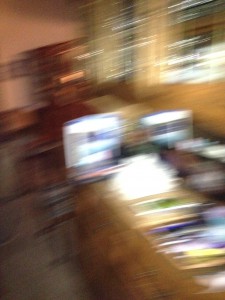 There have been some recent articles about studies relating to loneliness and dementia.  Here is a link to “Loneliness Increases Dementia Risk Among the Elderly,”  which discusses the link between loneliness (NOT living alone or other social isolation) based on a three-year long Dutch study of elders. The jury is still out about the causality of the relationship (does loneliness lead to dementia – or the other way round?), but there is a strong correlation. The authors of the study are quoted as concluding “further research is needed to investigate whether cognitive deterioration and dementia are a consequence of feelings of loneliness or whether feelings of loneliness are a behaviourial reaction to diminished cognition.”

This report doesn’t necessarily tell us anything particularly new, but several studies have used different techniques over the years to demonstrate the correlation.  Here’s a link to an article published in 2007 entitled “Link Explored Between Loneliness and Dementia.”  Is loneliness one of the risks associated with aging, or is it something that some people have all their lives (coping behaviors, approaches to life and relationships) that is exacerbated by the many trials of old age?  If you are lonely at this time in your life, could “forgetting” be a coping behavior or affect along the lines of being more trusting and more optimistic?  These latter two phenomenon have been noted by psychologists and neuroscientists.  To reiterate, we have never had this many old people on the face of the earth before, so there are more “test subjects” in this regard. . . .

This brings me back to “elderhood” and the need to forge new connections and maintain old ones in later years. In the UK there is even a campaign to end loneliness and this past year the organization aiming to reduce chronic loneliness for people over 65 launched a “Dementia Awareness Week.”

Dementia and loneliness seem to be one of the combinations that may be difficult for clinicians to study because it involves a wide range of factors, not the least of which is self-reporting by people of loneliness.  Are social activity and engagement enough for persons to stave off dementia?  Will there be an effective “prescription” in the near future for preventing the development of or  slowing the advance of dementia that involves more social engagement?  what will this look like?

The roots of elderhood begin in a person’s forties and fifties – at that sometimes imperceptible and for some of us dramatic divide between the first half of life and the second.  I just bought a new Kindle and look forward to reading Richard Rohr’s book “Falling Upward: A Spirituality for the Two Halves of Life” (Jossey-Bass 2011)  on my new toy.  In the meantime, there are the library books – my most recent find relating to this topic is “Born for Love: Why Empathy is Essential and Endangered,” by Maia Szalavitz and Bruce Perry (2010: Morrow).  The link between empathy and loneliness is profound: can we as individuals allow ourselves to see and feel another person’s loneliness and isolation?  How might that change our own lives and those of others if we were freer and more capable of reaching out to and being with another?  It might change our world.

This reminds me of a favorite Anais Nin quote:   We see the world not as it is but as we are.

If we have lived with much pain and fear in our lives and our reaction is the slow tightening of our heart, it can become difficult to open to people who come into our lives to share the world with us, in whatever way they do.   Fear of change is essentially fear of life – this makes me think of the ancient Greek Heraclitus and his observation that we can never step into the same river twice.  How do we look at our own life – do you tend to view life as a process of becoming – or perhaps more as a series of “doings” or a “bucket list” or some other forms of accomplishments?  I would submit that our youth-glorifying culture tends to focus exclusively on the doing, and when there is no more “doing” left for us, life becomes pointless.   This is not to minimize the importance of doing, rather it is to put doing in its proper context . . . .  Loneliness may simply be that fear of rejection, that sentiment of “why bother – they won’t like me anyway.”  Perhaps the forgetting, which is the dementia – is a coping mechanism for this in an aged brain.  Contrast this reaction with letting go of the fear and anxiety of pain and pain avoidance and embracing the change.

Here is another Anais Nin quote:

Each friend represents a world in us, a world not born until they arrive, and it is only by this meeting that a new world is born.

Empathy can allow our hearts to open to new people and experiences and new worlds for us if we become friends with another.  In short, it can keep us alive.

This reminds me of a favorite and very simple prayer: that I may live until I die.

Perhaps too many of us are dying prematurely, by our own hands, hearts or minds  – slowly and almost imperceptibly.