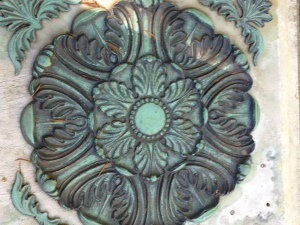 This is a continuation of my post from last week. . . . (and also a celebration of three enjoyable years of blogging on this WordPress website of mine)!

Pilgrimage is also a way of separating oneself, often in the company of other like-minded people, from the everyday and the ordinary, to discover what is there for us to find beyond or underneath our everyday existence and its often commonplace occurrences and numbing familiarity.

The pilgrimage, which I characterize here as beginning with exile, can itself be a journey to wilderness as well as from it, depriving us of all of our devices, props, comforts and habits of doingness.  What we were previously unable to see in our life, through our way of being (often obscured and covered over by all our ego-defenses) can be laid bare and render us  . . . . exposed and vulnerable.  This is how many of us experience a health crisis (young or old) and this is how meaning can creep in.  It seems to require the emptiness of that wilderness of exile, for there is no place for it to be (be experienced) when to rest of our life is already full or otherwise protecting us from the uncertain, the unknown.

Meaning can move through our lives in a qualitative way, even when it may or may not move in a chronological way.  I’m thinking here of the meaning, what Elizabeth MacKinlay refers to as the movement from provisional to final meanings.  The Spiritual Dimension of Ageing (Springer 2001) at 153-65.

So, what then is meaning, which seems to be the outcome in some respects of the movement from exile toward return (or the movement between them) which could be characterized as a ritual of pilgrimage?  Sometimes meaning comes from waiting in the desert, in a darkness of unknowing with an emptiness, a lack of the expected and familiar of the commonplace having been taken from us.

Here is where I return to the place where I started – the quote from Thomas Merton about wilderness, discovering our wildness in our waging of the battle against despair.  I turn now to a faithful companion, Viktor Frankl’s book Man’s Search for Meaning:

There is nothing in this world, I venture to say, that would so effectively help one to survive even the worst of condition, as the knowledge that there is a meaning in one’s life.  There is much wisdom in the words of Nietzsche: “He who has a why to live for can bear almost any how.

On the topic of pilgrimage as a decidedly anti-modern undertaking, I think of the mysteries which we often take for granted with the shrug of our shoulders.  Take broken heart syndrome for example, an otherwise unexplained phenomenon in which an otherwise healthy surviving spouse of a long term marriage dies within a year of their life partner.  Sometimes it is too difficult to discover (as suggested by Dr. Frankl) the meaning in our suffering.  What about pilgrimage and its relation to healing?  Retired anthropology professor Michael Winkelman writes this about religious healing:  “The linkages of symbols and physiology provide therapeutic effects in religious healing by aligning individuals with cultural expectations, values and beliefs. “  He notes further that the basic mechanisms of symbolic healing involve the following processes:

Metaphors have the power to heal and can themselves serve as a vehicle for the pilgrimage, for a return to meaning.  A return to meaning? Yes, I would make the observation as one who is rather fond of springtime pilgrimages to distant places.  Sometimes all we need is not a change of scenery but rather a change of the eyes through which we see our worlds.  I’ll quote next from an observation raised by the English poet William Blake and discussed by (another English poet and commentator) Kathleen Raine:

For Blake experience was not a learning but a forgetting (and Wordsworth too so presents it), a loss of vision, a narrowing of consciousness, or as Blake puts it, a falling into the “deadly sleep” of materialism, to become oblivious to that beauty seen with the eyes of innocence.

Perhaps the pilgrimage of living and of elderhood, when experienced as a movement from exile to return, is essentially a tapping into the human story, the meaning, which we already know – but have managed to forget or lose sight of along our way, our life’s path.