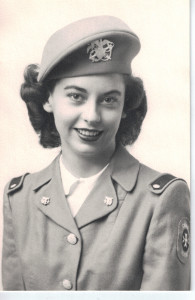 My Mom, the Nurse Cadet

Ageism, like all forms of discrimination, limits the respect and dignity afforded to a group of people and likewise, reflectively, diminishes the same qualities on those persons who are projecting those judgments and limitations onto others.

Each of us has the power to understand, see, respond to, have compassion for, and be with another person.  The problem is many of us don’t often see it as a “power.”  Sometimes we view compassion as a weakness!  If we think of it – that power – as a way of acting, we often see it in the context of “power over” in the social hierarchical and “currency” context of our interaction, like when someone asks themselves before responding to a person before them “how important is this person to me, to my agenda?”  Another kind of power is the power with others, which can be as simple as a small family unit or a work group agreeing on the desirability of getting a common problem solved or a challenge effectively managed in a way that will work for everyone.   This is where the naming comes in (I know you were starting to wonder)….

Dacher Keltner of UC Berkeley lists one definition of compassion as

the feeling that arises when you are confronted with another’s suffering and feel motivated to relieve that suffering.

We often focus on compassion as including only suffering, but I would submit that compassion also properly includes compassionate joy, the ability to feel and share another’s happiness and joy.  The Buddhists call this “sympathetic joy.”

The power of naming, which contains the secret of our relationship to our world, is not something most of us take the time to ponder.  One of the advantages of conscious Elderhood or second-half-of-life thinking, is that we can take a bigger picture view which doesn’t threaten our position in life.  Still, elderhood presents many challenges for all of us, and it is not always an easy transition from the earliest part of our lives, even if we derive meaning from those three sources identified by Viktor Frankl in Man’s Search for Meaning: purposeful work, love, and courage in the face of difficulty.  I have referred to Richard Rohr’s book in previous posts, but Falling Upward is worth mentioning again in his approach that the loss of certain things as a gain of others.

Old age –  how we look at these things, who is the problem, what is the problem, whose problem is it, how will the problem be solved or remain unsolved, whether we consider ourselves part of the problem or part of the solution. . .   I think it is safe to say that people aren’t fond of thinking more than is necessary, and that we prefer simple words that are easy to pronounce and understand.

Often we find that as soon as a concept is labeled, it changes how people perceive it.  This is consistent with the linguistic version of the Heisenberg effect of the perceiver on the perceived and vice versa.  This is the outward-looking part of the naming.

Naming and unnaming in the context of Elderhood is in part concerned with the losses sustained as one ages, and invariably many of us focus on those exclusively, ignoring the positive and liberating effects of entering into the second half of life (for those of us embracing that stage), a time of meaning, when we realize that all of our life is our life’s path.  In using our power to name – both ourselves and others, we can often misname and unnamed.  Let’s have a look at a couple examples.

How do we name the losses of aging?  Where do these losses take us?  Is it to a place of grief and mourning or is it to a place of understanding oneself as a person who will die one day, or more likely, a mix of the two.  There are many losses in old age, and many opportunities for grieving.  Do we take the opportunity to grieve and move on, to open to new life or do we hold on to what was and will never be again?

How do we misname the challenging aspects?  Where many people suffer from a chronic disease – such as Parkinson’s or diabetes, the answer to “who am I?” can often change so that a person becomes an embodiment of a disease.  I think nearly all of us bristle at such a prospect or practice.

Stay tuned, in my next installment I’ll explore how we often unname an elder or some other person with dementia.