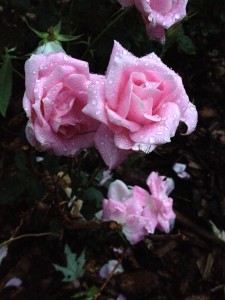 Roses of a Certain Name

Where is this place – old age?  In the first post I looked at the power of naming and how we often use and misuse it in the context of challenges presented by aging.  Here in the second post I will explore the individual and collective means of naming in the context of old age, vulnerability,  elder abuse and other kinds of naming and identity. Did I mention there will be a part three?

One of the losses many elders face is a loss of place, of the previously recognized or accustomed stature and home  – at least in the generally recognized sense of the term (if there even is such a thing).  I have blogged about Eric Erikson’s stages of the life cycle (psychosocial) development and his wife and collaborator Joan Erikson’s addition of the ninth stage when it became apparent that the eighth stage didn’t really cover the breadth of longevity in the context of all the physical challenges and responses to those that an old (80’s-90’s) person and body often faces.  I find it interesting that the ninth stage also denotes a shift in the trust/mistrust pole, where a physically and socially vulnerable elder can come to mistrust their own abilities and capabilities as well as those of the environment in which the elder finds him or herself.

So, instead of asking oneself “what do I want to be when I grow up?” a related question may still be forward-looking – as distinguished from backward-looking, but it involves our continued functioning and capacity.

A recent article in The Times of India referred to efforts  by HelpAge, an Indian nongovernmental agency, to identify abuse of the elderly in that country, noting that when the study commenced ten years ago, even elders living with families were very lonely and sad.

So where do we as individuals look for guidance to navigate the terrain of Elderhood?

How do we chart the course collectively and collaboratively as a culture and within the bounds of our legal system?  Well, it depends of course.

I think a big part of it concerns how we address these questions involves our perspective on them  Do we look at elderhood  as a window or elderhood as a mirror?

I will note that the either or setup above might just as easily be a “both and” lineup.

The Mirror.  What is the story we already know of ourselves as we approach that officially recognized age of retirement, 65?  Can we manage to arrive at or transport ourselves to Erikson’s eighth stage which begins at 65?  BTW, the eighth stage – the virtue of which is wisdom, represents in Erikson’s “psycho-social crisis” category that of ego integrity versus despair, the significant relationship here is “mankind, my kind” and the existential question for this stage is “is it okay to have been me?”  But I would ask, do we really need to wait that long to get to “wisdom?”  What of those of us who might be stuck in some continuous loop of an earlier stage – maybe the “intimacy versus isolation” stage. . . .

There is also the question of regret, depression and other negative emotions can have on that backward glance at our lives.  But what of those who are still looking forward – perhaps in recognition of Kierkegaard’s observation that while life can only be understood backwards, it must be lived forwards?

The Window.  One of the hallmarks of Erikson’s ninth stage – whether it is an extension or an additional category, is a term which Joan Erikson has provided: gerotranscendence – you can read more about it in this article from the Journal of Aging Studies.

Geotranscendance (yes, I’m spelling it with “dance” on the end, it’s been done before!) is about building on that strength of wisdom from the eighth stage and looking forward and beyond oneself, hence the transcendence.  I thought of the tee-shirt I’ve seen a few times: “old age is not for sissies” when I was reading about Joan Erikson’s description in the ninth state of the daily dystonic element of despair.  Perhaps this means of transcendence is in this respect a means of survival, of going beyond the despair and dis-integration, to look beyond the self for broader meaning.  Maybe I’m straying off-topic. . . .

So how do the eighth and ninth stages factor into the socially-acceptable and praiseworthy paternalism of mandatory reporting statute regarding elder abuse?  Well, I’m afraid they go back to that death denial and youth glorification temple that is such a fixture in our daily modern life.  When we look in the mirror – who is it that we see?  When we look at elders, who is it that we see?  What is our relationship to the world and how do we make sense of it?  First, we give it a name.

Every Judgment is a naming, and every judgment is (or more precisely, potentially is) a name, can become a name.

More about naming and unnaming in the mirror and through the window in my next installment. . . .