I visited the Chalk Art Festival last weekend at Larimer Square in downtown Denver.  Once again, my cousin Marty Calomino  was an artist exhibitor. 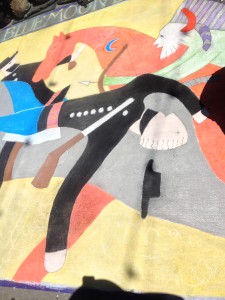 This is a picture of his chalk detail from Red Horse’s pictographic account of the Battle of Little Bighorn.  I love looking at chalk art because it is so unabashedly temporary.  I think part of that distancing ourselves from art – that happens to most of us after about the third grade or so, is as a result of thinking of art as something big and permanent made by “artists.”  What is deemed art tends to fluctuate over time. . . .  that’s where I tie in chalk art with conflict and old age!

Let’s face it – for many of us, old age is “the enemy.”  I include here beloved poets such as William Butler Yeats who has described it as a time of regret.  For others of us, old age has a different meaning.  Resident in this camp are poets like Walt Whitman, who penned

Do you know that Old Age may come after you with equal grace,

Day full-blown and splendid-day of the immense sun, action,

The Night follows close with millions of suns, and sleep and

The fact remains that old age simply scares many of us.  Death at the end of old age, after an illness – or anytime we can see its approach – well , this is more than many of us can bear.  Hence the conflict.  Conflict is a part of life, so it is natural.  What is it about how we deal with aging, frailty and health care challenges that make these particularly susceptible to conflict?  The answer to that is, as my late father used to say “autobiographical.”    Sometimes the conflict is barely detectable or it is underground.  At other times, open hostilities may feature verbal violence, threats and even physical violence.

So where can someone turn for help? Finding the right fit to get help to manage or resolve a conflict can be a very daunting task.  As an elder and probate mediator I often hear from people – often adult children and other family members – who are looking for assistance in resolving their dispute before they feel a need to resort to the court system.  Often there is at least one person ( a stakeholder ) and sometimes a bloc of persons who will simply not take any action to remedy a situation unless they themselves choose to originate the action.

So let’s take a look at conflict at the end of life – and identify a few of its more predictable sources:

I have written a few blog posts on the topic of conflict in the health care setting at the end of a person’s life.  But this kind of conflict is not limited to a hospital or even home hospice care, and the conflict can arise whenever there is interaction among people, often family members, who have differing expectations, beliefs and different coping strategies for facing another’s illness and the end of life.  In Issue 73 (March 2013)  of the Health Care Chaplaincy newsletter (to which I subscribe) one of my posts  was quoted by Rev. Jill Bowden, director of chaplaincy services for Memorial Sloan-Kettering Cancer Center for my observation in a blog post that “a  patient’s impending death ramps up emotionality…and often leads to emotional, verbal  and sometimes physical outbursts of violence among family members and loved ones.”

If the right people can agree to participate, mediation or family facilitation can help family members productively manage difficult situations.  Overcoming the inertia to contact a mediator or other third party neutral can be difficult, and it is often challenging to convene all the participants (also known as “disputants”) to a family meeting or mediation, but it can be done.

2. Financial matters – who is in charge and who has the authority to manage a person’s affairs?

You might be wondering why I distinguish here between who is in charge and who has to authority to manage another’s finances.  The person “in charge” may be the person who is getting assistance from another with organizing and managing paying their bills.  More than once, in durable power of attorney scenarios where an agent has taken over a principal’s affairs, I have heard the agent describe themselves  as a person having “power of attorney over” the principal.  That really reverses the purpose of the POA and turns the tables on who works for whom.  The agent works for the principal and serves the principal’s interests.  Sometimes agents are ignorant of or forget this important detail.  On several occasions I have seen an agent who has been acting under a power of attorney and the agent has not educated him- or herself about how to behave and transact business for the principal as the principal’s agent.  Also, in a situation where there is one adult child “in charge” and another with the legal authority to act on behalf of the principal, this can be a another source of conflict.

3.Conflict in a decedent’s estate administration – after someone has died

If the illness and death of a loved one has produced conflict among family members, and if the conflict is still simmering or about to boil over, opening an estate can be the match in the tinderbox.  Sometimes the person who was in charge of or presided over a deceased person’s finances will have their authority revoked or rescinded by the disapproval of others.  The level of misunderstanding in this context of grief can increase exponentially.  Many families and blended families with adult siblings can figure out ways to weather this storm while others cannot.  The glue that held the family together, the deceased parent – on whose behalf the warring siblings were once able to rally together, is now gone.  Sometimes the wishes of a parent and their memory are insufficient to overcome their difficulties in getting along.  This adds to the individual’s and the collective grief.

In a later installment, I will talk about how these disputes can be aired and productively managed in a family meeting or, if the conflict is protracted – in mediation.