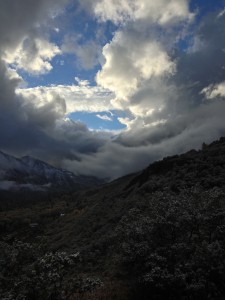 This post, along with one for next week,  is about dying – the process of dying to be precise.  I liked this quote from a PubMed.gov  article  I found about dying with dignity:

I have been working my way up to writing this post since losing both of my parents in the space of thirteen months – March 2010 for my dad and April 2011 for my mom.  Both were hospice patients at the time of their deaths.

As I quoted the Blackfeet saying in a previous post: Life is not separate from death.  It only looks that way.

What do we really know about death?  It has always been with us, but in our modern culture we are often estranged from it, treating it as some intruder.  I recently checked out Kathleen Dowling Singh’s book “The Grace in Dying: How We Are Transformed Spiritually As We Die.”  I found especially interesting her chapter on the Psychospiritual Stages of Dying.  She describes three basic phases of the final journey: chaos, surrender and transcendence.  For many of us who don’t have any real experience – personal or professional – with dying or death, I think this can seem like a bit of a stretch to describe a process that is as unique as our lives but that looks to be a fairly universal phenomenon – at least among those who go through a process of dying, as opposed to a sudden or unexpected death.

There is a wide variety of how we face death in our individual lives.  Much of it is informed by our culture, which is why I write about grief and death and dying in these posts.  There is much death denial in our country and I think this robs us of important opportunities to honor someone at the end of a life.  This isn’t just an American phenomenon, this estrangement from death.  Here is a link to a German website on the psycho-spiritual aspects of dying.    Denial isn’t always the case of course – I think of an extended family member who planned the menu for the catered meal after her funeral.  But then there was another who refused to speak about her terminal illness, treating that part of her life as some aberration perhaps, disowning it even.

So back to the stages of dying, there is much we can learn about this and it can inform the conduct of our lives in such meaningful ways.  In hindsight, I can see the onslaught of the first stage as my father grappled with the ravages of illness and age.  It comes with a realization that we are perhaps not (as we may have believed all of our lives)  the identity we have come to think of as ourselves, that our separate and personal sense of self is perhaps not all that we are after all.  This is the beginning of the transformative journey to the end of this life.

Chaos.   I remember a dream that my father described to me some months before he died.  He was residing in a nursing home while getting physical therapy every day and trying to regain the strength to return home.  I was pretty sensitive to his difficult situation and I wanted to be able to understand what was going on without asking too many questions.  I certainly didn’t want to ask him any questions he wasn’t ready to answer or consider.  He described the dream to me as follows.  He was on a moving train, travelling in a boxcar for some reason (my dad had worked for the railroad as a switchman during the summer and winter breaks in college).  In this boxcar were some unsavory characters, and for reasons unknown to him they roughed him up pretty badly.  I listened to his description, not really having any idea at that time what it might have meant.  He stayed at this facility for a couple months until he was able to return home, after some modifications were made to the house for his challenges with mobility.

On a couple of my visits to him at the nursing home he expressed concern over leaving my mother as his survivor.  He was concerned about how she would get along, whether there would be enough money.  I tried to reassure him.  These were cherished conversations we had.

After he returned home, his complications increased and then he was placed in hospice care.  His terminal pain needed to be managed better at that point, so he stayed for several days in a hospice care facility.

Surrender.  I learned from the chaplain at the hospice facility that his bags were packed and he was ready for the final journey.  After his terminal pain was under better control, he returned home.  This was a very difficult time for my mother.