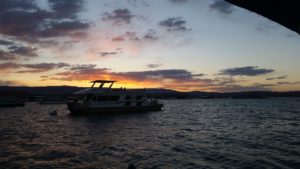 Sunset on an Artificial Lake

For this first post of June, I am revisiting a topic that has been discussed in previous posts: Alzheimer’s (or other forms of dementia) and the fear of aging.  Combining that volatile mix with the question of assisted dying presents a long list of novel questions.  The topic  was sparked by a phone call I received from someone residing in another state but who was looking for information about Colorado’s End of Life Options Act.  The specific query concerned the caller’s desire to explore options to end a spouse’s suffering from Alzheimer’s disease.  My response was fairly straightforward and I think the caller was a bit surprised by my candor.  I explained that under the Colorado law a patient or “qualified individual” was required to, among other things, have the capacity to give informed consent to the  receipt of the aid-in-dying medication to end the qualified person’s life.  See Colo. Rev. Stat. § 25-48-102(13) defining “qualified individual” and § 106(e) which concerns more details of the individual’s “informed decision.”

The caller was surprised when I explained that the only legislature which has to date considered expanding the aid-in-dying law to dementia patients was Oregon.  The Oregon Senate Bill 893 would allow for those persons otherwise qualified for administering receiving life-ending medications under Oregon’s Death with Dignity Act, except that the  patient who ceases to have capacity to give informed consent can still be given life ending medication if there is a specific advance medical directive which expressly authorizes an agent under a medical power of attorney to collect and administer the life-ending medication if the incapacitated person previously received a prescription for such medication.

Alzheimer’s Disease and other forms of dementia (here I will collectively refer to them as AD) are typically the most feared diseases of post-modern westerners who privilege their rationality (remember the Cartesian mantra “I think therefore I am”) and perceived autonomy over all else.  Further, our techno-medical way of examining aging, of parsing out different functions of one’s life ascribed to different body parts, leads us to believe that whatever form of cognitive impairment – age related or otherwise – might just be a part in need of fixing or a disease waiting to be cured. This type of reductionist thinking refuses to look outside its own narrow pigeon hole. In the meantime, those of us who do not perish will age in our own unique ways and many of us will struggle with its challenges.

Whose fear is it – and whose suffering?

What do we make of this fear of AD and fear of a person’s – er – a personality’s – disintegration?  I think in several important ways it is the same fear as the terror of dying, just a bit more latent and prolonged, and therefore more menacing than death for some people.  I’ll quote from Shakespeare’s Julius Caesar (III.i. 102-105) here, the conversation between Cassius and Brutus:

Cassius: Why he that cuts off twenty years of life

Cuts off so many years of fearing death.

Brutus: Grant that, and then death is a benefit:

So are we Caesar’s friends that have abridged

His time of fearing death.

There are many ways to respond to one’s own AD and to that of a loved one’s.  One way is to project our own fears onto the other person, who appears a shadow of the former self or as completely incapacitated.   But there is no standard response, even though some “conventional wisdom” (I use the term tongue in cheek here) might be welcomed by many who find the disease and its process most bewildering.  A slight detour here . . .

Bewilder is defined in the Merriam Webster online dictionary as (transitive verb):

1:  to cause to lose one’s bearings (see bearing 6c) bewildered by the city’s maze of roads;

2:  to perplex or confuse especially by a complexity, variety, or multitude of objects or considerations His decision bewildered her. utterly bewildered by the instructions.

And what if we break down that verb into a command – be wilder, wild from the noun wild) to be:

1: A natural state or uncultivated or uninhabited region.

2: (the wilds) A remote uninhabited or sparsely inhabited area.

My concern is that there are many faces of Alzheimer’s Disease just as there are many aspects to an individual’s response to a loved one affected by AD.  I am thinking particularly of a recent article published in Kaiser Health News, entitled “How to Help Alzheimer’s Patients Enjoy Life, Not Just ‘Fade Away,’” and you can read that here.  The fact remains that each person is affected by AD is his or her own way and the “preoccupation with the cerebral pathology” (which the psychiatrist Dr. David Rothschild criticized in his 1936 paper on the psychodynamic model of senile dementia) often serves to fan the flames of fear and anxiety over our collective preoccupation with the losses of aging.  There are many other paths to choose here – not just the one of least resistance which is fear based.