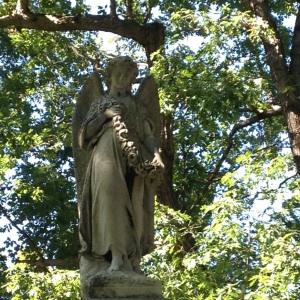 This second part of the post focuses a bit more on the qualitative aspect of memory – memory as meaningful life activity, not just a necessity of daily functioning and detail management that holds together moving parts.  I will include the quote from James Hillman I used in my first post:

Why do the dark days of the past lighten up in late recollection?  Is this a subtle hint that the soul is letting go of the weights it has been carrying, preparing to lift off more easily?  Is this a premonition of what religious traditions call heaven, this euphoric tone now coating many of the worst experiences, so that there is little left to forgive?  At the end the unforgiveables will never be forgiven, because in old age they do not need to be forgiven: they simply have been forgotten.  Forgetting, that marvel of the old mind, may actually be the truest form of forgiveness, and a blessing.

Hillman, The Force of Character at 93.  In case you’re wondering about whether I am promoting some Romantic view of memory or denying all the recent advances in neuroscience, I would unequivocally state “no.”  In fact, a favorite of mine in that discipline is Dr. Norman Doidge’s book published in 2007 entitled The Brain That Changes Itself.  Particularly instructive for purposes here is his chapter entitled “Turning Our Ghosts Into Ancestors,” about psychoanalysis as a neuroplastic therapy that helps a sixty-year-old man recover long-buried memories of the death of his mother (when he was a small child) so they could be transformed and improve his relationships and life.

I think part of what Hillman is talking about is that quality of memory, which often gets neglected in our present culture that glorifies the person as a right-bearing agent of our own destiny, valued for capacity, independence and measurable productivity.   This makes me think of Massimo Cacciari’s book The Necessary Angel.  I find intriguing what he says about our space-filling tendencies of this modern obsession  we have with chronological time, especially where he observes that “the greatest idolatry is the cult of the has-been of the irreducible it-was.”   Cacciari at 51.

If this obsession of the factual, objective or “forensic” memory is idol-worship of the “cult of the has-been,” and indeed widely and universally worshipped indeed as “chrono-latry,” then might the recognition that letting go of details that do not serve life review and accumulation of wisdom be an appropriate response to that greed, of releasing the power of the idols?  If we as human beings are more than our personalities accumulating and exchanging our experiences as a form of “currency,” then recognizing this and getting past the worship of the idols of chrono-latry would look like progress!

One very important aspect of the quality of memory for many elders is as a part of life-review, of integration and wisdom acquisition and consolidation.  Another of the qualities of memory is kairos.  It strikes me that our generation’s dependence on smartphones means that many of us need to memorize fewer of the important operational details of our lives.  This is of course liberating, but it is also a trade-off.  No, I won’t go astray here to discuss that issue!  Suffice it to say that the term “memoria” in the Western classical tradition is based on the Latin term for memory.  Memoria was one of the five canons of rhetoric, which grew out of oratory.  The classical orators used no notes, let alone Power Point slides!  I add this point to draw the connection between memoria and kairos – I’ve blogged about it previously.  Kairos being the right time, the opportunity, based on an attunement to the right time to recall memory – memory being identified in the Ad Herennium as “the treasury of things invented.”  So perhaps we might come to more closely examine and question our relatively recent and very narrow definition of what is memory and look at the historical notion of memory in its broader context.  This broader view of time in both qualitative and quantitative aspects will certainly diminish the power of the idols of chronolatry.

Yes, this reminds me of the Steely Dan song, Time Out of Mind – you can listen to it here.  This is life review, traditionally a province of poets to write about the letting go at the end of a life and there is thankfully much wisdom from that quarter.

From stanza IV of Dejection: An Ode, by Samuel Taylor Coleridge:

… we receive but what we give,

And in our life alone does Nature live:

Ours is her wedding garment, ours her shroud!

And would we aught behold, of higher worth,

Than that inanimate cold world allowed

To the poor loveless ever-anxious crowd,

Ah! from the soul itself must issue forth

A light, a glory, a fair luminous cloud

And from the soul itself must there be sent

A sweet and potent voice, of its own birth,

Of all sweet sounds the life and element!