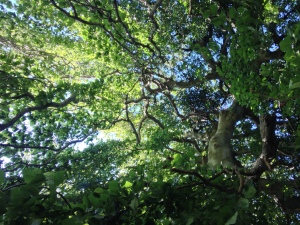 So I’m back to that rather slippery theme of memory again – this is the first of two parts. The online Merriam-Webster defines memory as: (1) the power or process of remembering what has been learned; (2) something that is remembered; and (3) the things learned and kept in the mind.  This all sounds very quantitative and linear to me, right in line with most conventional thinking about memory as factual recall, that forensic memory which is objectively measurable.  I think the definition of memoria from the ancient Greeks is more useful and inclusive of the human experience.  Conveniently, it also encompasses the non-chronological aspect of time about which I’ve written before – kairos.  We modern Americans come to think of memory in some fairly odd contexts, like computer memory and we often liken what’s in our heads to our personal hard drive as if it were some kind of data storage system – which it is of course in a very narrow sense.  This also accounts for much of our recent “de-mentation” or offloading many of the factual details of our daily lives like calendars, phone numbers and emails to our smartphones.  So what is the nature of memory in our minds? Is the memory of our heads different from the memory of our hearts?

The Atlantic Monthly recently featured the article “Why I Hope to Die at 75,” by Ezekiel Emanuel, physician and bioethicist.  The message he states is one I have offered to clients many times: longevity has a down side, a dark side potentially in the form of a “gray area” of diminishing cognitive capacity, perceived “uselessness” and for many of us, dementia.  I think the article is an important counter point to our death-denying and youth-glorifying mainstream culture that tends to view aging as a long process of descent from some place in the prime of our adult lives, along a journey where things can only get worse.  But this article that states emphatically – 75 is long enough.  This sounds a bit like some of my Baby Boomer age mates – who having lived through a parent’s dementia – proclaim they want an advance directive that has a box which states something like “if I get dementia and need Depends, just shoot me.”  Don’t get me wrong, I applaud Dr. Emanuel’s message on several different levels in which it challenges conventional wisdom and the misplaced faith our culture has in our medical-industrial complex to keep our lives extended (not accounting for quality or purpose), but I think it misses the mark.  Because babies are delivered via scheduled Caesarean section, does that mean we can cash in our chips at a scheduled time as well?  I think not!

We are re-negotiating the tightrope of what we believe we control and what we do not control as it affects our lifespan in our old age (just as in any other stage of life, but perhaps with less baggage).  We have become used to so many answers from the medical establishment that when we have this unprecedented number of elders facing dementia and/or incapacity, we are likely to simply “declare war,” spend lots of money and turn to big Pharma for some “fix” of our “problem.”  The drug companies are more than willing to oblige and provide us with a pill to help assuage our fears, and yet another tool to interrogate the one with the slipping memory . . .  “did you remember to take your pills today?”  It often seems like an elder can’t exist as such without some kind of medical intervention!

Evident in Dr. Emanuel’s insightful article is the denial of the slowing down associated with old age (read the account of the aftermath of his father’s heart attack).  I contrast this with what the late psychologist James Hillman wrote about in The Force of Character.  In chapter nine, entitle “Leaving,” Hillman describes the conflict between his sixty-six year-old patient and her nonagenarian mother, for whom she supervised care.  The patient was continually frustrated with her mother’s inability and seeming unwillingness to be principally concerned with the factual details of forensic-based (often short term because it involves daily functioning) memory.  Hillman observes (at 88) that he saw this mother daughter conflict as exemplifying “the difference between short-term and long-term memory.  It is as if you cannot have both at once.  One has to give way to the other.”  The chapter provides useful insight into the “life review” stage of elderhood which is gaining wider acceptance as a part of life, not just a loss of the familiar ways of doing from pre-retirement adulthood.  I think it is one of the centerpieces of connected and engaged elderhood.   Hillman closes it with the following questions, so often neglected:

Why do the dark days of the past lighten up in late recollection?  Is this a subtle hint that the soul is letting go of the weights it has been carrying, preparing to lift off more easily?  Is this a premonition of what religious traditions call heaven, this euphoric tone now coating many of the worst experiences, so that there is little left to forgive?  At the end the unforgiveables will never be forgiven, because in old age they do not need to be forgiven: they simply have been forgotten.  Forgetting, that marvel of the old mind, may actually be the truest form of forgiveness, and a blessing.

Hillman, The Force of Character at 93.

This observation brings me back to the rhetorical or existential question I posed in my previous blogpost about what is remembering and what is forgetting.  Hillman weaves that question into a life’s span.  I will close this first post with a poem: Walt Whitman’s poem “Whispers of Heavenly Death”

Whispers of heavenly death, murmur’d I hear;
Labial gossip of night—sibilant chorals;
Footsteps gently ascending—mystical breezes, wafted soft and low;
Ripples of unseen rivers—tides of current, flowing, forever flowing;
(Or is it the plashing of tears? the measureless waters of human tears?)

Some parturition, rather— some solemn, immortal birth:
On the frontiers, to eyes impenetrable,
Some Soul is passing over.