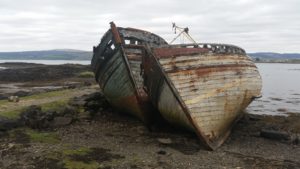 Old boats on the Isle of Mull

This is the last post (for now at least) on the topic of capacity and incapacity. In my field of practice, I must be comfortable with making assessments of capacity concerning potential clients and I must also be familiar with the panoply of assessment tools used by the medical establishment (and psychologists who perform neuropsychological evaluations of capacity).

Capacity and incapacity are legal constructs, but they often arise within a medical context and are typically established (in the Colorado probate code as a requirement for a physician’s letter to support a petition for guardianship) with reference to medical evidence relating to a person’s cognitive capacities or mental status.  Interestingly, issues of medical capacity, or what is commonly referred to as “decisional capacity,” is something in which the court system is rarely involved.  So this relationship between legal and medical capacity is not much of a two way street!

In this post I’m looking at where these two notions of capacity and incapacity can meet.  Sometimes we hear that an elder is not capable of doing something any longer – for physical, cognitive, psychological or emotional reasons, and we often fail to consider the intersections of these parts of each of us as people.  We must depend on the integration of those capacities for our continued functioning.  Sometimes it can be very difficult to determine whether a difficulty is short lived or temporary or whether it is a harbinger of greater difficulties which lie ahead.  We each face these challenges alone, but we must rely on others in this stage of our lives, just as we have in earlier, higher functioning stages of our lives – but most of us  struggle mightily with our vulnerability.  The NIH website has a list of resources available for dementia caregivers available here.

There is an intersection between disability law and elder law in the approach to how we facilitate the assisted decision-making on behalf of another as well as the living arrangements for an incapacitated adult.  This is the term  ”least restrictive means” or also “least restrictive environment.”   The former term is distinguished from regulatory and constitutional law, in the probate incapacity context it is the language of the preference for limited guardianship over unlimited or plenary guardianship.  For the latter, we see the term in the federal Individuals with Disabilities Education Act (IDEA) which refers to inclusion and mainstreaming, which are of obvious relevance and value to elders who are losing or have lost capacity (ies).

The parallels between the rights of the disabled and the rights of incapacitated elders are numerous.  A large number of elder law attorneys practice in both fields of law because there are so many similarities.  Here’s a link to the Guardianship Alliance of Colorado’s website, which has great resources relating to protecting adults with disabilities.

This determination of incapacity sounds like a one-way street from which there is no turning back, but that is not the whole story.  I came across an interesting article by law professor Nina Kohn and Catheryn Ross about how a person previously stripped of “legal personhood” can regain their legal status.  You can read “Lawyers for Legal Ghosts: The Legality and Ethics of Representing Persons Subject to Guardianship” here.  The introduction recounts the story of Jenny Hatch, a young woman with Down’s syndrome who was a ward of the state and who successfully challenged not only the terms and conditions of her guardianship, but also her right to make decisions for herself.

Elders in Colorado are part of a “protected class” of persons in our elder abuse statute.  Some of my colleagues take offense at the reference to age because they are close to that age (70) and still don’t want to think of themselves as “old” or in need of protection.   I suspect they don’t consider themselves “old” because they don’t have enough youngsters in close proximity. . . .

What does incapacity mean for a person once a probate court has determined the person incapacitated?

Incapacity determinations by probate courts generally strip a previously capacitated adult of nearly all of their civil rights.  In Colorado, wards (what a person who is named as Respondent in a guardianship petition is called after the court determines the person is incapacitated and in need of a guardian) can still exercise their right to vote.  So once a persons is stripped of those civil rights, a ward essentially ceases to exist in many ways or is legally dead.  This is one aspect of vulnerability.

If you find this patently offensive, please consider the historical common law rules of marriage and property which were “imported” into North America by the colonists.  Hey, didn’t we recently celebrate our independence on the Fourth of July a month ago?! These “coverture laws” basically reduced the legal status of an unmarried adult (otherwise capacitated) woman from an adult to the legal status of an infant once she was married.  These coverture laws pertained to a married woman’s legal rights to own property, to sign contracts, make a will and many other useful matters.  A married woman was otherwise legally incapacitated, but she could seek relief from a court of equity.  Connecticut was one of the first states to establish the property rights of married women.  Back in those early days, the courts of law were separate from the courts of equity, the latter were often referred to as chancery courts.  Those courts were merged with courts of law in many court systems but still exist as separate courts in states like Delaware.  In Colorado’s system of “combined courts” a court sitting in probate is both a court of law (employing the statutory probate code as well as case law) and a court of equity.  Equity is specifically referred to in our probate code, but the two concepts are still legally distinguished from each other because they are different sources of law and the remedies it affords parties.

A ward can regain his or her legal status of personhood – but it can be daunting.  In Colorado, there is a special form for that.   A psychologist I know recently contacted me about getting this form and providing a supporting letter for their client – here is the form from the state judicial website JDF 852.  If imposition of a guardianship over a ward is legal death, then termination of the guardianship based on a restoration (or re-evaluation) of capacity is akin to resurrection.  I won’t go into the gnarly details about the attorney’s ethical rules of representing wards seeking termination of their guardianships, but the Kohn article above is an excellent overview of how attorneys can overcome some of the challenges inherent in our ethical rules to assist those persons in getting their legal personhood or at least some of their rights restored.  Attorneys need to assist these wards to protect fundamental rights.

That’s all for now….