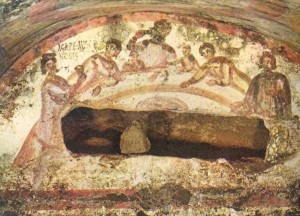 I have included this painting of a chalice because of its powerful symbolism.  I will put aside the well-recognized religious symbolism (especially among the Abrahamic religions “of the book”) and employ its metaphorical meaning for my purposes here:

A thing that is being earnestly pursued or sought after

The word appears to originate in the Medieval Latin gradalis, meaning “dish” and our English term comes from the Old French graal.  Thinking of the term as a dish, and considering the Latin from which it originates, it’s not a stretch to consider it as in the courses of a meal (our stages of life).  If we think of our life as a long meal, and the dish, bowl or cup as what we have come to think of in our mind as our life and perhaps even its meaning or significance, the grail can serve as a good metaphor for pondering what it is we think or feel we are lacking in this life, as the grail of what has been sought but not yet achieved or attained.

In the context of elder and probate mediation, this grail, this missing part of an elder’s long life or a family’s story, can be harmonious or respectful family relationships.  In my experience, the single biggest hurdle to making the space for a productive engagement to have a conversation about family conflict lies in identifying the sources of conflict.  The conflict may have been careening out of control for years but it has finally crashed, landed somewhere and gotten stuck as a result of a variety of circumstances.  What to do now?

Well, it depends on who is asking and who is willing to “own” the conflict.  There are invariably a number of different perspectives on what went wrong and how to “fix it.” This is the often insurmountable threshold to getting close to any room in which a grail might be found (to use a building metaphor).

Family members typically operate under ground rules for engagement that were established in childhood and people often carry these unspoken rules and assumptions forward into the future.  In fact, this informs many of us about our “life story” and we adopt it as part of our identity, for better or for worse.  So how does that play out in the context of an elder’s health crisis or end of life scenario, when “the chickens come home to roost?”

I have previously blogged about sources of such conflict here, as well as what to look for in a mediator, but I don’t believe I have ever addressed the topic of getting past the “hand wringing” to proceed to mediation.  It strikes me as odd that I haven’t done this before because I have probably had a dozen such conversations over the years with potential clients about what is involved in convening an elder mediation.  This can be distinguished from probate mediation, where there is already some underlying legal proceeding which has at least crudely identified what is at stake and in which a judge may have ordered or strongly suggested to disputing parties that resolution of all or some of the issues should be done in a mediation.  I have been engaged as a mediator in several of these types of disputes (guardianship, estate administration, trust administration).

Speaking is usually a function of thinking, but our chosen words, what they say and convey to others has a multi-layered meaning in the elder and family conflict context.  The grail story, the myth of Perceval or Parsifal, depending on the land or time period of recounting of the story, is essentially about speaking as a function of thinking and interacting with the world and others.  I find it particularly useful in this context of elder mediation and family disputes involving an elder.  If you would like to read more, consider The Speech of the Grail, by Linda Sussman (1995: Lindisfarne Books).

There are two important questions asked by the protagonist of the story.  Both questions are asked from a position of freedom, not bondage flowing from a sense of obligation.  The first question “what ails thee?” is about the power of observation, from an action of paying attention to another’s plight from different perspectives beyond one’s owned limited and perhaps comfortable perspective.    The second question, “how can I help?” recognized the relationship involved and might also be phrased “how can I help myself in helping you?”  This is the initiation of the thinking/habitual speech into the realm of the heart-space.  This is true listening that is usually very difficult, uncomfortable, sometimes painful and often cannot be controlled, leaving us feeling vulnerable.

This posing of these two grail questions is the hurdle, the threshold that prevents most individuals and families from getting to productive conversation about a crisis stemming from the elder family member’s life.  Here is a poem from the eighth century poet Rabia al-Basri about the heart:

In love, nothing exists between heart and heart.

Speech is born out of longing,

True description from the real taste.

The one who tastes, knows;

The one who explains, lies.

How can you describe the true form of Something

In whose presence you are blotted out?

And in whose being you still exist?

And who lives as a sign for your journey?

I will close with a question she raises: Can we muster the strength to be signs for the other’s journey?