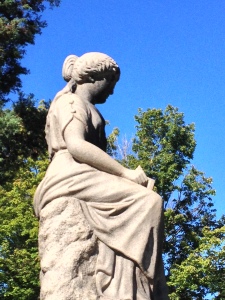 Say what?! Grief, Barb – isn’t that suffering that we all want to avoid?  Well, not so fast. Yes, I am working my way up to some more posts about euthanasia, and grief and grieving is the middle ground for this passage.  Sadly, I have been unsuccessful in locating any old SNL clips on the internet which feature Gilda Radner as Emily Litella, I’m thinking of her piece about “Youth in Asia.”  I’m an optimist, so I’ll continue to search . . .

Let’s begin this one with a question – What is grief?  My web search turned up a wide variety of things including: keen mental suffering or distress over affliction or loss; sharp sorrow; painful regret; a strong, sometimes overwhelming emotion for people, regardless of whether their sadness stems from the loss of a loved one or from a terminal diagnosis they or someone they love have received; and it seems that grief can be both a cause as well as a result.  This is demonstrated by the verb “grieve” which is the activity of feeling, experiencing grief.  One source noted that the definition of grief depends on things like who we are grieving and when we are grieving and also why. I find it strikingly odd that in the sentence following such broadly appropriate subjective factors, the accepted “stages” of grief are identified.  I am certain that Dr. Kubler-Ross did not intend her “stages” to become the accepted norm for what passes for grief and grieving in this country, but that is what has happened. The reference to these stages  is invariably accompanied by a disclaimer like “while there is no one ‘right’ way to grieve. . . “  but there most certainly is a correct way because we have quantified and objectified this most personal and subjective of human activities!

The fact is, we have precious few recognizable rituals around the expression of grief, and because we lump it under that generic heading of “suffering” we insist that people get through their own stages as quickly as possible so that they can “move on” with their lives.  Odd way of minimizing this feeling that can arise over most any loss, in fact it can be argued that the small losses and how we handle those are good practice for the larger ones that invariably lie ahead.  This is one of the reasons I always insisted on pet funerals when my kids were young.  If you don’t start somewhere by practicing, you just don’t have any life experience on which to draw when you may really need a bit in reserve.

So, why am I criticizing the focus on the stages of grief?  I do not mean this in any way as a criticism of Dr. Kubler-Ross’s groundbreaking work, but rather as an observation that grief has now come to be objectified and quantified such that there are acceptable parameters identifiable by the medical and psychological community.

Sometimes this thinking about feeling can simply go too far.  What comes to mind here is the lost sense of balance.  I am going waaay back here, to the ancient Egyptians and the symbol that has become known as the eye of Horus (as personified by the goddess Wadjet and no, not the video game by the same name. . . . ). You might recognize it, it looks like this:

So the components of the eye of Horus consist of several constituent senses and also correspond to measurements. Forr my purposes here I am concerned with its association with the six senses: smell, sight, thought, hearing, taste and touch.  Yes, thinking is listed as one of the senses – it is one of our faculties after all.  In our mainstream culture that is so focused on quantifying things, identifying objective reality of a material universe, thinking gets elevated far above its historical position in a more traditional pantheon of human attributes.

I refer to the eye of Horus for purposes of asking ourselves about the place where we find ourselves in this culture with all of our thinking, our information and our never-ending thirst for more.  We have become estranged from uncertainty and questions about which thinking does not provide suitable answers.  We have forgotten how to ask the philosophical questions and how to be with the mysteries. I am not diminishing in any way the information which we now know, I am merely wondering about its proper context.

Death, the end of life and the end result of feeling the loss of another or a part of ourselves – these are  mysteries in many ways that thinking can help us with but thinking is only part of the response, the activity required.  Our over-reliance on thinking has caused us to forget how we honored death and the end of life in previous times. I do not believe this is progress and I find this aspect of the death taboo very troubling – that we cannot even comfortably talk about that about which we cannot really “know” from a thinking sense.  This doesn’t mean we are not equipped to talk about this topic from other perspectives – it just means we are much less likely to be comfortable in doing so.

So, I will end this post with a poem penned by a friend about mystery.

It was written by Richard Wehrman, a co-retreatant with me at a seminar in Rochester, New York last September.  The topic of the retreat was “The Angel of Memory.”  Thankfully, Richard willingly shares his beautiful poetry.  This one is entitled “Visits From the Dead.”

This morning the Dead visit me on

the veranda. We drink strong coffee and

watch the wind raise white waves on the sea.

The Dead do not like to be called the dead.

“That is a word the so-called Living use,” they say.

“We are the ones alive, the ones who are real.”

The sun shines through my companions. I cast

a shadow; they do not. “We are so much clearer than you,

are there, I can only see them with my heart.

a whole life from beginning to end.

Later we go exploring together, up and down

the sandy paths by the sea. “We are beings

as you are—as are the trees, the animals, the clouds

in the sky.” And where do you live,

they say, “where else could we be?”

In the evening I gaze over the palms and orchids,

over a glistening vibrant sea. Everywhere I turn,

cast up by the sea. Their vibration is endless, like

looking through rippled glass. We are one

What if the dead – not our children – are our future?  So, dear reader – here’s to life and being alive and conscious of it!