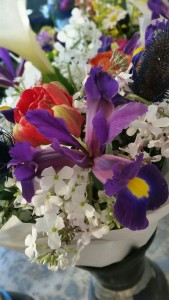 This post is dedicated to my dear cousin, who recently lost his beloved wife of forty years.

Yes, this is another installment in my series, but it wasn’t quite planned that way. . . .   After traveling to the funeral out of town, I thought more about this psychopomp topic and thought about the other side of death, what the mourners, those grieving face in going on without their loved one.  Life as they know it, as my cousin recently observed “is over.” What then remains is a future that requires the survivors to reimagine their lives, the mourners must now construct their lives without the active participation of the one they love.  Here it strikes me that grief is also a doorway, a threshold and . . . .a psychopomp in some form because it will take us to that new world, often an unimagined life.  Here is where the grief, the being and doing of it – ready or not! – does transport us to a new and unfamiliar terrain of our lives, a new way of living.

Whether we believe in an afterlife is often beside the point for many of us – grief invites us to feel and to be with it and to imagine what our life could or might look like without that person because, while we are imagining, we can’t believe or disbelieve. It strikes me that the loss, the sense of shock that often accompanies a death of a loved one that often causes a sense that things are not quite real or even surreal, occurs in both the event itself as well as our reaction to it.

So grief too, is often itself a kind of death, a death of the known and familiar existence, a death of identity relative to the loved one.  I wonder – might this prepare us (the survivors, the mourners) somehow also for our own eventual demise?   This makes me think of some of the emotional responses to grieving, the activity of grieving and how we feel it in our bodies.  Is grief capable in some way of turning us inside out?  The death of the loved one causes some kind of corresponding death in us as well.  We simply cannot go on as before.  But what was the life before, and how did we think of it and experience it?   I think of Tom Cheetham’s book: All the World an Icon: Henry Corbin and the Angelic Function of Beings (North Atlantic: 2012) and his observation:

The movement here of grief, away from life as it was previously known (I don’t think it’s a huge stretch to liken it to the “objective Truth” reference above), can be precipitated by the “inside-out” or “upside-down” feeling of the lives after profound loss.  In addition, our lives may have an aspect of feeling that is immanent or transcendent, and perhaps both at different times.  I will contrast them here:

Immanent – is defined as being within the limits of possible knowledge, inherent, remaining within; and

Transcendent – going beyond the limits of ordinary experience, greater than what is usual.

We typically focus on the transcendent here, as in the moving beyond, toward considering the possibility – because we are left with no real alternative – that the deceased is gone but there is still meaning in their existence, that there is some felt meaning beyond us in our physical presence.

Here, the invitation, the movement into grief can be a means of poiesis.  Poiesis means “to make” in ancient Greek.  This kind of work reconciles our imaginal activity (outside of belief, it is by nature supra-rational) with the stuff and matter of our existence, and this is done within the construct of time.  And yes, I could go off on a tangent about poiesis, but I will resist the temptation.  This kind of work, it strikes me, is a destruction of the idol of time (akin to that “objective Truth” mentioned above) as we knew it, a life as we expected it to be.  I have previously referred to the work of Massimo Cacciari, the Italian philosopher and politician who wrote:

The greatest idolatry is the cult of the has-been, of the irredeemable it-was.  Against it, the

living raise their cry-song to the Living.  Only at this point – in the moment of song – can they truly

call themselves living; prior to this they were a succession of moments destined to death, born to die.

Cacciari was not writing about grief in that quote, but it struck me that in his term “chronolatry” there is the possibility of grief, of grieving for what was and never will be again, which is also that which allows us to fully feel the present and its fullness or emptiness  – whether we want to feel it, or not.  And so, the “idol” or fixed idea of the life that was known, that was lived with the person now deceased, is not broken or destroyed but rather it is transcended to a new meaning, a bigger one necessitated by that deceased person no longer actively participating (or seeming to participate) in the mourner’s life.  I am not saying that this is what grief is, while I find all the writings about grief very helpful in many respects, I also find them constraining and unhelpful to the extent they attempt to identify some “grief process” which all of us must “go through” in order to come out the other side or to get on with our lives.  Grief is simply too big to be left to the psychologists alone to develop such a typology or taxonomy!

Grief as a psychopomp here is a threshold, an invitation to cross over from that life that was – the idol that is only a physical shell, to arrive at an icon that invites a re-imagining of new life with a bigger (or smaller) meaning, which is often one that moves into the meaning of transcending.  Beyond the shell of the idol, the icon glows with possibility, it represent a threshold where the can be an unfolding into the future.  Grief here, is the invitation, the psychopomp that is uninvited and unfamiliar – yet the one who cannot be ignored.  What is left is somehow beyond our reach, but imaginable and comes to us, moves toward us even in the depth of our despair.