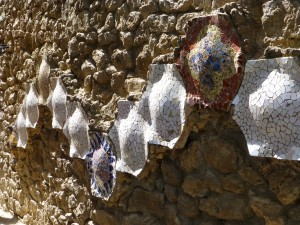 I love this picture of Gaudi mosaics.

It was taken by a friend on a recent trip to Spain.  Why the mosaic theme?  Because the field of  elder law, and the drafting and use powers of attorney in particular, are emblematic on our individual reliance on one another, especially during times of anticipated or unanticipated vulnerability.  By the time we reach mature adulthood or “elderhood,”  our lives typically appear to be mosaics of experience, identity and relationships.  Our interconnectedness and reliance upon others is certainly indicative of a mosaic pattern.  So – you’re wondering, okay Barb, what does THAT have to do with durable powers of attorney?

Durable powers of attorney have come a long way over the last thirty years or so.  This is a good thing because we have an ever-growing number of baby boomers swelling the ranks of “older Americans.”  Most boomers aren’t yet ready to use the term “elder law” as a field of law applicable to them!  Durable powers of attorney (POA for short) is one of my favorite topics to talk and write about because there are so many different directions for a discussion.  I’ll focus on the general financial POA for this post.  In Colorado, we don’t technically need to refer to POAs as “durable” anymore because under the Uniform Power of Attorney Act that became effective January 1, 2010, all powers of attorney are durable unless stated otherwise.  I’d like to start with some questions:

I could go on with lots more questions, but suffice it to say they would by and large have a single answer:  “it depends . . .”  How typical for a lawyer to respond in this way!    The bottom line for POAs and what makes them so “interesting” (read: challenging)  from an elder law attorney’s point of view is that our legal system does not tolerate ambivalence very well.  Our system is grounded on the values of predictability, consistency and logic.  In many important ways, the legal and practical implications and applications of a POA are inherently unpedictable.  Why is that?  Because life itself is uncertain and unpredictable and a POA is in this respect a “life management” tool.  Incapacity for older people may or may not be considered in the same category as mental illness in terms of how the legal system treats individuals, but for probate court purposes, there are few major differences.   So are you saying that old age is like a mental illness Barb?!  Not exactly.

As a drafter of POAs as preventive and useful documents, I have to say that the document is inherently fraught with difficulties – some of which include questions like:

A POA document is a powerful tool that can be used for either proper or improper purposes, by someone employing it for its intended purpose as a precision tool in the event of emergency, or as a blunt instrument to gain control over another’s finances and life.  Attorneys who draft powers of attorney owe it to their clients to explain the document and how it can be used and potentially abused.  It’s true that it is relatively easy to get a POA document “off the internet,” but will you know if it is valid for its intended purposes according to the the law of the state in which you reside?  What about how to use it?  Don’t forget that the most powerful tool to prevent abuse of a POA – whether it be a result of inadvertence, incompetence or bad intent – is education.  This is where the elder law attorney comes in. . . .