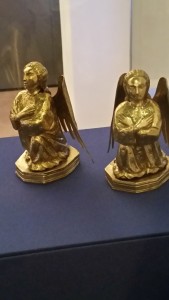 The Angels of Voting?

As our national election day nears, I thought it would be worthwhile to revisit the topic of voting rights and elders with dementia.  What kind of folks am I describing with such a broad sweep? Here I’m talking about the people with advanced dementia, some of whom reside in nursing homes or other institutionalized settings who have a court-appointed guardian acting for them as well as those elders who are living in the community and may have a diagnosis of dementia or simply suffer from cognitive deficits or decline.

So – you’re wondering whether I will reveal that folks suffering from advanced dementia who reside in say, a Colorado “memory care” facility, still retain the right to vote? Why yes, that is one of my points!  Voting law is a combination of federal and state laws.  As you may recall from studying American history, some states in the late 19th century passed “Jim Crow” laws that (among other things) imposed a poll tax, literacy test or other legal hurdle to black voters residing in those states.  It took a long time to remedy the situation, but the Voting Rights Act was signed into law by President Johnson in 1965.  Why do I mention this important legislation of the civil rights movement? Because it, along with federal case law, help inform the backdrop for the federal law of the right to vote.  But while the Voting Rights Act and federal law prohibit states from denying any citizen the right to vote on the grounds of race or gender, the Act specifically allows states to enact laws to deny the right to vote to people for two reasons: criminal conviction or mental incapacity [See 42 U.S.C. § 1973gg-6(a)(3)(B)].

It is important to note that the right to vote has been an area of struggle for many people in the disabled community.  Elder law’s capacity and incapacity analysis and some of its underlying policy often make reference to law concerning the disabled.  Voting rights of elders with dementia is one of those areas of intersection with disability law.

For resident citizens who are disabled, incapacitated (those persons for whom a court has appointed a guardian) or persons with dementia, Colorado is one of a relatively small number of states (eight) which has neither mention of mental incapacity (some terms used in other states include idiocy, insanity, non compos mentis, etc.) in our Constitution as a bar to voting nor any state statutory law prohibiting the (mentally) incapacitated from exercising their right to vote.  You can read more about assessing the capacity to vote here.

Keep in mind that there is a Colorado statute which relates to individuals confined to a mental health institution.  That statute specifies that individuals confined in a mental illness institution “shall not lose the right to vote because of the confinement.” C.R.S. 1-2-103. So, as long as that person is otherwise qualified to vote, they will be given a ballot. Additionally, Colorado law requires mental health institutions to help assist their confined residents to register to vote and obtain mail ballots.

The difficulties for elders with dementia who are Colorado voters will boil down to more practical matters concerning, for example, how to get assistance to complete a mail-in ballot.  That is a more challenging proposition as the federal law Help America Vote Act of 2002 (Pub.L. 107–252)  and Colorado laws require that voters with disabilities be able to cast their vote privately and without assistance. Each Colorado county has purchased accessible voting machines to be used in every polling place which are designed to provide the opportunity for voters with a wide range of disabilities to vote privately and independently.  These laws and other applicable law designed to prevent improper influence on voting may effectively render an incapacitated person’s right to vote meaningless because the person will not be able to exercise the right.

Perhaps this will be a new frontier of elder law: requiring cognitively accessible ballots and other election procedures.  Making these a priority could potentially provide a tangible benefit for many other voters.