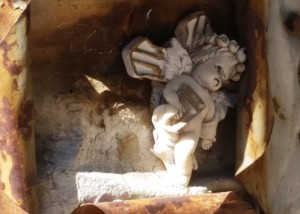 In this post in my series I will revisit the notion of a good death in the context of how we see our lives.  So I’ll start with a question: What do we have or what is it that is ours in the sense of that being part of our life?  I’m posing this in terms of a sense of meaning, an awareness or appreciation of ultimate meaning of or purpose to one’s life – as we face our mortality and everything in between along our life’s path – like illness, grief and profound life crises (to name just a few).

The world breaks everyone and afterward some are strong at the broken places.

Death is the ultimate question in this regard – the “all stop” for all that has happened in our lives, all that we have participated in to create our lives.  Every living being eventually dies as each of us will one day pass away, but how do we see this ending as part of our own life, in terms of one’s own experience of isolation, connection and relation to others?  Can our life prepare us for our unknown ending? Whether elderhood – either or own or our participation in other’s elderhood (as adult children for example) or our longevity prepares us to be resilient or brittle in this regard is a difficult question indeed.  One writer has observed that “human beings primarily collect” and these collections of experiences (and things as representations of experience) form our identity and notion of self, but Jacques Lusseyran also observed that “seeing is responsible for the prevalent conviction that we shall understand and completely recognize the world when we progress from one form to the next, from one phenomenon to the other.”  In his posthumously published collection of essays “Against the Pollution of the I,” (2006: Morning Light Press) Jacques Lusseyran (who lost his eyesight in childhood) noted that “[w]hat simply has to be understood is that seeing is not the work of the eyes alone.” Id. At 58.  Lusseyran is keenly instructive on the point of the sighted taking for granted that what they see is all they see, and is all that exists.  Lusseyran notes further

I believe that blindness has its own function.  It has the tasks of reminding us that the despotism of one sense, sight, is unjust, and of cautioning us against the form of perception prevalent today.  And, further, it is the task of blindness not only to recall to memory the origin of all knowledge, but also to remind us of the wonderful gift that permits a mutual exchange between other forms of perception and perceived pictures.

From “Blindness, a New Seeing of the World,” in Against the Pollution of the I at 64.

As we examine the place of elderhood and our own inevitable demise, can Lusseyran the blind writer who describes the seeing he experiences as not limited to the visible surface of things, or of people, point out to us the limitations of this superficial mistaking of what is real?  I would submit that this has become a kind of collective amnesia, this affliction of our death denial and our obsession with youth, particularly looking or appearing young.  I might be digressing just a bit, but it’s hard to say!

A person without an inner life is a person with nothing added: an empty sack which therefore cannot be filled and cannot remain standing.

So, back to the question posed at the end of my previous post, about the difficulty of adjusting our thinking about human frailty in the face of aging.  This is a fundamental question for which few of us have prepared.  In our collective viewing of the superficial aspect of old age, we have come to largely identify aging as a medical problem or challenge – to be managed or overcome.  Is this failure to see the person in front of us, the insistence on “seeing” only the superficial aspects of who they appear to be our own form of collective blindness?  In the medical context, amidst the prevalence of hyper-specialization, is the medical care for elders largely a habitual reaction to some piecemeal medical problem a failure to see the big picture of a human being as a person and not as some collection of medical difficulties?

I am still reading Katy Butler’s excellent book “Knocking on Heaven’s Dorr” and in her penultimate chapter “A Better Way of Death,” she describes the reactions of many readers to her New York Times Magazine article about her father, his pacemaker and its complications to his dying process.  It took me right back to the events leading up to my mother’s demise.

My mother was a strong and healthy 85-year-old woman who had a couple years prior survived a pain in her thigh – which turned out to be a staph infection resulting from the titanium which was surgically pounded into her broken femur and was (after many months of complaining to her doctor) after a proper diagnosis removed.  But she was not in a good place when she started thinking about and demanding a hip replacement.  After all, she had survived two previous knee replacements – one in her 60s and a second in her early 70s, so she was a veteran of such surgeries.

But in the previous year before her longed-for hip replacement she had lost her husband of 59 years and two of her three sisters.  Did her surgeon or her primary care physician ever consider these details? I will probably never know.  It was not part of the provision of her informed consent, that much I know. Keep in mind that under our Medicare system, doctors get paid well to intervene in such ways, even though her surgeon was someone otherwise known as “conservative.”

I will not soon forget the look of indignation on the surgeon’s face when I (her health care agent and only daughter) asked him about a DNR (do not resuscitate) in the event something went terribly wrong in the surgery.  This on the morning of surgery after I had done some wrangling with the anesthesiologist about which anesthesia cocktail would be used as I was insistent on using the least invasive method first.   Within two months she was gone from this world.