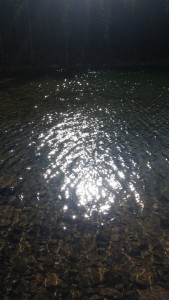 I will begin this follow-up to my previous post with revisiting a definition of autopoiesis:

Planetary physiology is the autopoiesis of the cell writ large.

So the autopoiesis of self-production is a multi-layered process in which there are many different types of connections, depending on how and where we assign boundaries.  Do we see the aliveness beyond our own selves? Where our own boundaries of being are and who or what do they serve?  Two rhetorical questions which bring me to an examination of the nature of inquiry and the function of language . . . .

In the first chapter of Metaphor and Reality, Philip Wheelwright sets forth an equilateral triangle with the letters O (object), S (subject) and L (language) at each of the vertices, which he identifies as the “epistemological triad,” serving to illustrate the media of the formation of what might be called reality.  How we talk about reality, in terms of our participation in it, just as we participate in our own autopoiesis, is not simple to identify or describe when subject and object seem to change and the vertex for language is broad indeed.  How we come to describe this life each of us lives is no simple undertaking!

Sometimes we are invited to participate in something – before we know what it is or who it is that is being invited.  Often we are unfamiliar with the invitation and what it asks of us.  It is not known what it is – an event, a practice, a task, a knowing, an unknowing, a dance or simply play.  It seems that this participation is often like play, akin to a kind of music (which is older than language) that moves through us.  Makes me think of a previous blogpost about music, memory and dementia!

As with autopoiesis (and with the emptiness which is required for the process and which I described briefly in the previous post), within music and dance there are empty spaces, pauses, rests, hesitations – all of which serve to punctuate the content, organize the flow of expression and provide its beautiful uniqueness.  It strikes me that this is akin to the emptiness, the absence of something which the process of autopoiesis is dependent upon which I described in the previous post.  Sergius Bulgakov aptly noted:

Creation is nothing that came to be.

In our autopoiesis, language is undoubtedly part of our creation, notwithstanding its essentially paradoxical nature of what and how “it” communicates, and which also means it can be revelatory and mysterious – just as it can be more literal and descriptive.

So back to my theme here about autopoiesis and that emptiness, which I would identify as the “longing” which keeps us moving through this life, in search of.   Perhaps here is an opportunity to look at two aspects of this longing, this quest of autopoiesis: for both knowledge and meaning.  Knowledge is defined by Google as: (1) facts, information, and skills acquired by a person through experience or education; the theoretical or practical understanding of a subject; and (2) awareness or familiarity gained by experience of a fact or situation.  This knowledge is essentially part of the world of the intellectual world, its academic nature is a collective and ongoing acquisition.  As such it is a community enterprise, one that builds upon shared connections and information and advances as a field.

Meaning, on the other hand, is not so easily defined for my purposes here. . .  Google’s definition offers this for the noun: what is meant by a word, text, concept, or action; and this for the adjective: intended to communicate something that is not directly expressed.  The root of meaning is from the German and the Indo-European root of the word is the same as that of mind, or the element of a person that enables them to be aware of the world and their experiences, to think, and to feel; the faculty of consciousness and thought.  Meaning, then, is the domain of the person and is necessarily constructed in relationship to the world and in particular to the world of experience.

These two aspects of knowledge (acquisition) and meaning (awareness) are connected and ought to be connected via autopoiesis although autopoiesis might not necessarily require the latter, but then I think of Nietzsche’s quote here: He who has a why to live can bear almost any how and would immediately reconsider that observation!  The connection between the two is manifold and one without the other is folly.  The more objective, spoken, literal and objective knowledge which is shared and makes so much of interpersonal communication possible is inherently rational and logical.  What often allows the understanding to be readily shared however,  is its rendering – which is that which means there is no life force within it and is devoid of that subjective quality of “spirit” in that it is an agreed upon construct.  Meaning is subjective and personal, it may come from the unspoken language of gesture, ritual or symbol, and it also arises from our human yearning for a language of understanding, of experience , for what lies beyond words, the emptiness required for autopoiesis.  “Significance” here is as unique as each one of us in any particular moment.

To come back to this clearing away, the emptiness of which is required in our  autopoiesis, I am reminded how the creating – or “allowing” is perhaps more appropriate – of empty space is essentially the maintaining of space for openness, possibility and creation of a new self.  If the stepping back and allowing for the creation sounds both like a process which is part of autopoiesis and also a spiritual practice, that is precisely the connection I make here.  The Jewish mystical term for this is known as “tzim tzum.”

Knowledge and meaning are entwined in meaningful ways and they need to be connected – otherwise the rational or logical knowledge is barren of any aliveness, spirit, or any significance beyond its desiccated literalness that can establish its connectedness with the rest of the person and with the human community and the autopoiesis of the world.  Stripped of any “need” for meaning or even any context for it, beyond the simple denial of any existence of meaning, we have what often appears in our present post-modern culture of death denial and questioning whether there is even any “need” for a meaning of life.  This form of “progress”” is an objective materialism that pervades our thinking about scientific “progress” and results in an intolerable reductionism, unless you are quite satisfied with that small black box of what might pass for “reality.”