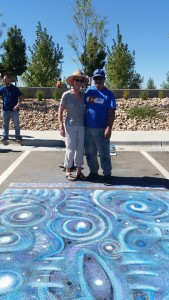 This is a picture of my cousin Martin and me at the Centennial Chalk Art Festival last weekend.

The Colorado Court of Appeals recently issued a decision concerning the type of evidence that must be submitted in a conservatorship proceeding.  In Colorado, a conservatorship is the tool for managing the finances of a person who is unable to manage his or her property or business affairs because the person is “unable to effectively receive or evaluate information.” Colo. Rev. Stat. § 15-14-401(1)(b)(I).  Imposition of a conservatorship on a “protected person” takes away a person’s ability to make their own financial decisions and just as in the case of a guardianship for an incapacitated person, the required evidentiary showing for imposing such restrictions on a person’s autonomy must be made by clear and convincing evidence.

The decision In Re the Interest of Neher v. Neher determined that the conservatorship statute did not require that medical evidence of a person’s inability to manage financial affairs due to an inability to effectively receive or evaluate information be included in the court’s determination.  In the Neher case, father had been dissipating many of his assets and a special conservator was appointed.  Father opposed the petition brought by his son to impose a conservatorship and so he was appointed counsel by the court to assist him in representation.   In Colorado, a respondent in a conservatorship proceeding or an alleged incapacitated person has the right to be represented by counsel.   In the Neher decision, the court of appeals made important observations in addition to confirming there is no requirement of medical evidence to support imposition of a conservatorship: the current conservatorship statute does not require expert testimony; nor does it require a petitioner to demonstrate the cause of the respondent’s inability to “effectively receive or evaluate information or both to make or communicate decisions;” the legislature’s removal of “mental illness” in the 2000 amendment to the statute supported the interpretation that medical evidence was not required; and the mere fact that the Colorado State Judicial form for Petition for Conservatorship of an Adult (JDF 876) includes a check box for medical evidence does not mean that such is required.

At this point, I will take a quick detour to explain a little bit about what is the role of respondent’s counsel.  A court-appointed attorney is an independent legal advocate who takes part in hearings and proceedings.  Contrast this with another role of an attorney in protective proceedings – that of the guardian ad litem.  The guardian ad litem acts as the “‘eyes of the court’ to further the best interests of the alleged incapacitated person or respondent in a protective proceeding and serves as independent fact finder and an investigator for the court.  In a nutshell, the court appointed respondent’s counsel must subjectively represent the client’s intentions, while the guardian ad litem evaluates (on a more objective level) and advocates for the best interests of the alleged incapacitated person.

Protective proceedings involve the stripping away of a person’s civil rights, and so appointment of counsel or appointment of a guardian ad litem can afford protections to the person who stands to lose their autonomy and can provide more information for the court as to the respondent’s situation, desires and rights.  A compelling reason for executing effective durable powers of attorney is to avoid protective proceedings.  There are times when financial or medical powers of attorney do not work for their intended purposes, which may require instituting protective proceedings – conservatorship for financial affairs and guardianship for health care decisions and living arrangements, but these instances are relatively rare.

Dementia can threaten an elder’s finances in several ways.  Bad financial decisions are of course not always indicative of dementia or other legitimate reasons for a person’s need for protection,  but  a conservatorship may be warranted to protect the assets of a person whose financial solvency would otherwise be threatened.   These threats often come in the forms of scams and other forms of exploitation of elders, but many times it is family members whose “protective” behavior looks strikingly similar in tactics to an abuser who controls another’s behavior through domestic violence.  Conservatorships are often pursued simultaneously with guardianship proceedings for an incapacitated person.  You can read a chapter from the Colorado Bar Association’s Senior Law Handbook about conservatorships here.

In addition to having the difficult conversation about end-of-life medical wishes and decision-making, I think it is also advisable to have another difficult discussion about financial affairs with a spouse, an elder parent or another family member whose autonomy is or may be threatened by bad financial decision-making and vulnerability to financial exploitation.

I will close this post with a poem about certain uncertainty, in honor of the fall equinox today:

What to hold onto?

A season of change.

And the letting go –

What allows the drawing in

I must discern leaves

From branches, giving what falls

Secrets of the heart.

So I lie still here

Within the deep ground, knowing

What cannot be known. 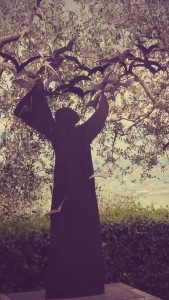 A Garden Near Assisi

This post is a continuation of my previous post about elder and probate mediation and obstacle identification.  The first grail question I examined was “what ails thee?” and it is one which I would like to explore in depth a bit more in this post.  What I am looking at in particular in this post is the larger function of seeing that is implied in the question above.  What is it that we can see about another, understand about the other’s situation from seeing them and encountering them in a question such as this?

The question is simple and seemingly straightforward, but it certainly goes beyond the obvious and the superficial – but that begs the question.  What is seeing, what is our ability to use our eyes, our sightedness, to encounter another person – especially one in distress?  Sometimes, in this culture that distrusts anything that can’t be readily explained or measured or understood at some level, we mistake the act of using our eyes for the ability to see.  What I mean by using our eyes is the sensory act of using our eyes, as sensory inputs to inform our understanding of the world.  What often happens, on the “did you see that?” transactional level of human communication is the confusion of our visual sense of seeing for its sensory utility for its own sake, as if the sense was something generic, that anyone with eyes could see in the same manner.  If this sounds farfetched, I will use the example of biomechanics, a popular idea of how the human “machine” works.  Certainly, if we are all machines then our standard issue equipment functions in similar ways, right?  Well, I’m afraid this is the dead end of the reductionists, and I’ve never been tempted to travel down that path.

So this sense of seeing, or rather more appropriately – the use of the eyes for navigating our environment, often amounts to an act of seeing which serves only to separate us from each other and our world.  This is the seeing described above, that which is focused on the material, visible and the “objective” if you will.  This is what is normally understood as the typical and usual way of seeing in our everyday world.  But this is not so for all of us. There are other ways of seeing in addition to or beyond the use of the eyes.

Here I think of the late teacher, author and a leader of the French Resistance, Jacques Lusseyran and I thank Mark Patrick for telling me about his autobiography, And There Was Light.  Lusseyran was left without sight in either of his eyes as the result of an accident at school.  His autobiography tells the story of his work as a leader of the resistance in Paris, sought out because he was blind, as well as his time spent at Buchenwald.  For my purposes here, in the context of the first grail question, I am looking at his posthumously published work Against the Pollution of the I (2006: Morning Light Press).  In the chapter entitled “The Blind in Society” he writes: “Blindness has shown me a space other than the physical one, which only serves to separate me from them and them from me.  This is the space where the stirrings of the soul and the spirit come into being . . . Thanks to blindness I learned to read many signs that came to me from others, and that usually escape the notice of the seeing.”  Against the Pollution of the I, at 46-47.  I find this observation most refreshing in the way it challenges the superficial nature of seeing things and mistaking them for what they appear to be on the surface.  It also leads to a conclusion that many of us “sighted” persons are lazy in that we are accustomed to relying on our sight to inform us of certain things in a certain manner and we mistake this surface reality for “all there is.”

Lusseyran’s questioning of the conventional utility of the sense of sight goes further.  In another chapter entitled “Blindness, A New Seeing of the World,” he refers to sight as a very useful tool and those who are deprived of it as suffering a heavy loss.  But he looks at the senses in a holistic and integrating way, noting that the loss of one sense can allow for the development of another.  Than he makes another observation: “But now we are faced with a great difficulty, for seeing is a superficial sense.”  Id. At 54.  He astutely observes that while the eyes can help us immensely, we should not mistake the tool of seeing with the eyes for its utility alone.  He goes so far as to state that without a willingness to go beyond the superficiality of sight, the seeing beneath or beyond  the outer surface, no true cognition is possible because we are locked into insisting that the tool itself is the purpose of sight.  The beautiful metaphor he uses to illustrate this inadequacy of limiting sight and seeing to the act of visual collection of information is the act of naming, knowing and thereby seemingly knowing the unknowable because . . .  we have seen it.  He identifies this rightly as idol worship.  Id. At 59.

What is our sight, our willingness to see another?   What is our ability to know another person for?  It strikes me that a function of seeing must be, as Lusseyran observes, the ability to clear away the noise, debris and clutter from our minds so that we can truly think about who we see and what they mean to us.  “What ails thee?” can be a mirror for our own suffering and inadequacy to see ourselves reflected in another person.

There is more to us than our visible exterior, our “clay.”  The late John O’Donohue has written beautiful poetry which speaks about our clay.  Another writer has observed this about our clay:

. . .   we are shaped and molded by what we once were and what we will become.  As the ultimate spiritual treasure, the spark of knowledge that inspired human faith becomes an internalized knowledge that will erase temporal history and return us intact to the primordial self.

John Herlihy, “Profile of Unfinished Man” in Psychology and the Perennial Philosophy, at 122, Samuel B. Sotillos, ed. (2013: World Wisdom).

This examination of what constitutes “seeing” in the context of the first grail question just might be followed by a similar pondering of the second question. . . .